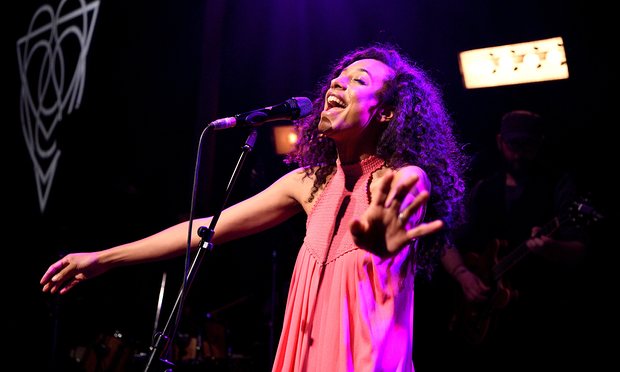 After a lengthy hiatus, Grammy-winning Leeds chanteuse, Corinne Bailey Rae, is back on the road again to promote her first album in five years, ‘The Heart Speaks In Whispers.’  She began this concert with one of the best tracks from the new opus – the ethereal ‘Been To The Moon.’ It kicked off a captivating performance from the 37-year-old singer that re-affirmed what a unique talent she is in a musical landscape dominated by clones and copycats. Accompanying her bittersweet vocals with guitar and backed by a tight band, the angelic-voiced Bailey Rae mixed up familiar old songs with choice selections from her new long player. Of the latter, the anthemic, folk-infused ‘Stop Where You Are,’ and the gorgeously seductive, ‘Green Aphrodisiac’ – which the singer introduced as being inspired by her love of the “greenness and oneness of nature” – stood out with its shimmering keyboards while from her back catalogue the delicate the sensuous groove ballad, ‘Closer,’ ‘Like A Star,’ ‘I’d Do It All Again,’ and ‘Paris Nights/New York Mornings’ all seduced the ear. The most biggest cheer of the night was reserved for ‘Put Your Records On,’ her debut hit from 2006, which brought the house down and capped off a wonderful evening of musical entertainment.