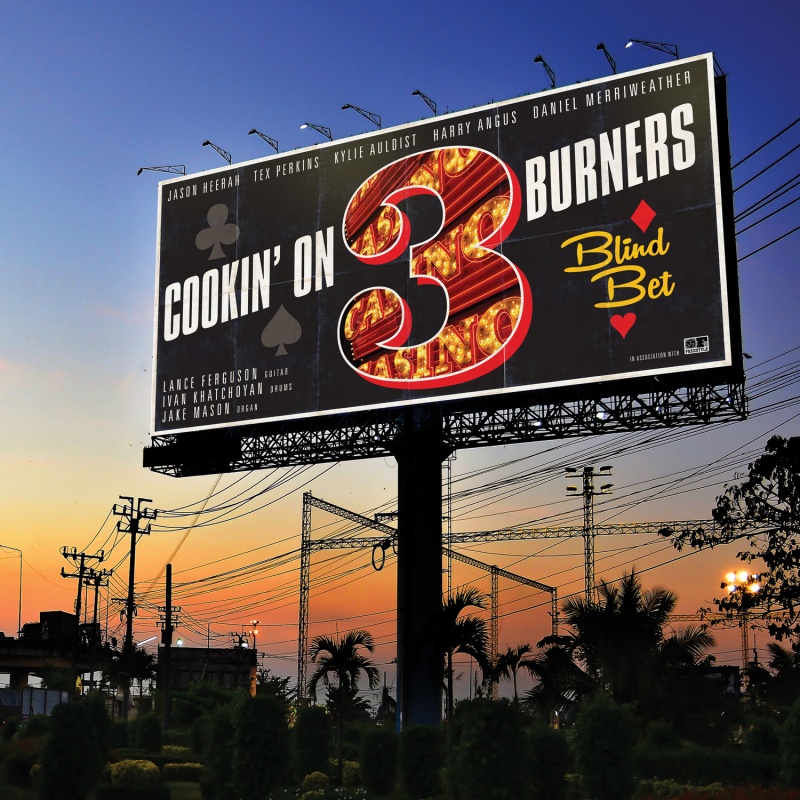 It’s been a long five years since Aussie’s finest – Cookin’ On 3 Burners – delivered their last album, ‘Soul Messin’, which, of course contained the still lovely ‘This Girl’. Since 2009, the 3 Burners (Lance Ferguson – guitar; Ivan Khatchoyan –drums; and Jake Mason – organ) have been working on all kinds of other stuff but finally they’ve managed to come together to deliver a new set that continues where ‘Soul Messin” left off.

‘Blind Bet’ contains loads of the band’s trademark 21st century small combo soul-jazz. ‘Skeletor’, ‘Of Dice & Men’ and the LP’s title cut are vintage soul-jazz outings and wouldn’t be out place fitted up with a Blue Note or Chess label logo. The two other instrumentals are a touch different. ‘The Spanish Job’ is a frantic thing – with some wild garage style surf guitar going on in there while ‘The Vanished’ is dark and sombre and could’ve been lifted from some art house 60s film noire.

It has though always been the guest vocal cuts that have won the widest circle of admirers for the band and here the fans won’t be disappointed with appearances from Tex Perkins, Jason Heerah, Daniel Merriweather, Harry Angus and, of course, Kylie Auldist. Ms A’s up front on two cuts – the tight n funky ‘Chew You Up’ and the more easily digestible ‘Mind Made Up’ – the cut that most emulates ‘This Girl’ . Like that one, this is bright, brash and brassy with the catchiest of melodies which Kylie delivers with her usual soulful flair.

Outstanding too is the raw and bluesy ‘Flat On My Back’. Vocalist Tex Perkins does a great job emulating the great Chess blues men Howlin’ Wolf and Willie Dixon. The whole thing’s quite hypnotic rather like the fabulous ‘Wang Dang Doodle’. The Jason Heerah vocalised ‘You Got the Better Of Me’ is different again – a breezy slab of 21st century organic soul. ‘Losin’ Streak’ (with Daniel Merriweather) is loose and funky and the final vocal – Harry Angus’ ‘Last Man Standing’ is a stately slowie, adding even more variety to a great “comeback” album. Yes, I do know Cookin’ On 3 Burners have never really been away…. but 5 years (musically) is a long time….. let’s not wait so long for the next set!