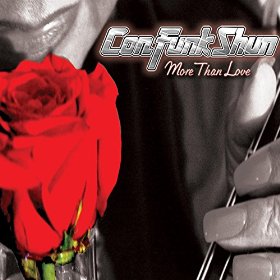 Confunkshun have a CV that goes way back to 1969 when drummer Louis McCall and guitarist Michael Cooper formed a band called Project Soul. In 1971 they morphed into Confunkshun (named for a tune by the Nite-Liters) and by 1973 they were being used as a Stax studio band in Memphis. One time label boss, Estelle Axton heard something in their playing and signed them to her label, Fretone. In 1976 they signed with Mercury and over 10 years released some 11 long players and scored a string of hits (notably ‘Ffun’ and ‘Chase Me’). Despite the success they were never considered premier league in the same way as, say, contemporaries The Commodores or EWF were and they split up rather acrimoniously with leaders Michael Cooper and Felton Pilate throwing accusations and allegations all over the place.

Time is a great healer (so too is the prospect of making some money out of soul fans’ love of nostalgia) and so a few years back Cooper and Pilate buried the various hatchets and reconvened Confunkshun and the result is this lovely little 14 tracker – the band’s first recording in over 20 years.

Happily, despite what’s gone before, ‘More Than Love’ is much more than an exercise in nostalgia. Sure there are lots of old school flavours within the album but the music is surprisingly fresh and contemporary. The band, it seems, have managed to stay true to their soulful roots but have managed to take on board contemporary R&B flavours too. Best examples of that hybrid sound are ‘Your Night’, ‘Say Yo’, ‘It’s On Tonight’ and the lead single ‘I Miss You’. All are definitely old school but they all have a whiff of the modern about them too…. in places they’ll remind you of newish kid on the block Ne-Yo. Little wonder then that ‘I Miss You’ has become a US hit – clearly appealing across the generations.

There’s also lots on offer that is proper old school soul –showing that there is no real substitute for experience. ‘Dance N With A Grown Man’ is a good example and the title says it all. Better though is the gorgeous ‘It’s Time’, a throwback to the great days of Luther Vandross, Teddy P and Major Harris. ‘Taboo’ runs it close as the album highlight… a lovely rolling soul groove. Album oddity is a cover of Curtis Mayfield’s ‘Move On Up’. Confunkshun try something different using a Zydeco as the lead instrument and strange as it seems, the Cajun flavour works…. this version retains all the pride and optimism of the original. Also worth a mention is the closing jam – ‘Nite-Liters’; a busy, jazzy groove paying obvious homage to their heritage. But it’s not the only glance backwards on the album… grown up soul folk will find lots to enjoy here.