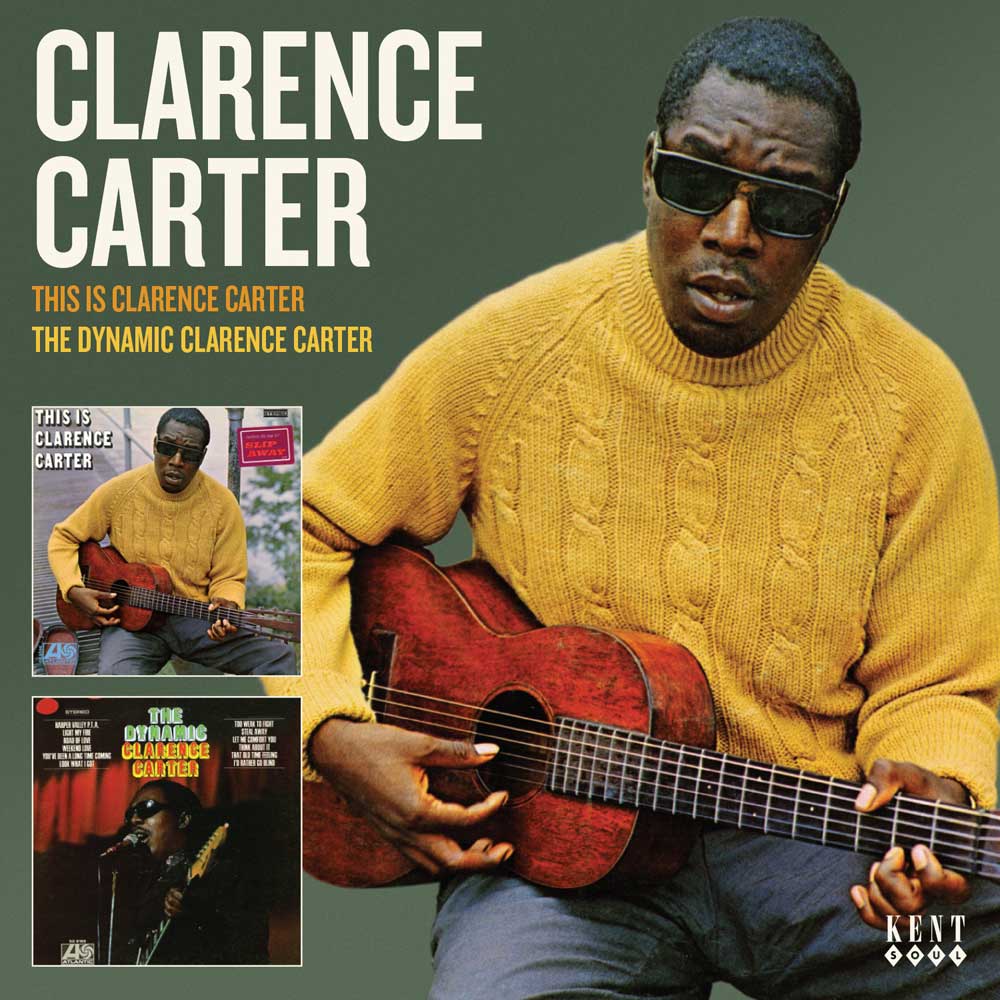 Over the past few years Ace/Kent have reissued most of the recordings that Clarence Carter made for Rick Hall down at Fame and now – rounding things off- they offer the lugubrious, Alabama-born singer’s first two albums as a welcome “twofer”.

Though recorded at the Fame studios, both ‘This Is Clarence Carter’ and ‘The Dynamic Clarence Carter’ were issued on the Atlantic label. Fame boss, Rick Hall had struck a deal with Atlantic after Carter’s first few singles enjoyed only moderate success. He figured releases on a higher profile label would get more air play and enjoy higher chart placing… and he was right. Early on in the Atlantic deal, Carter scored with songs like ‘Slip Away’ and ‘Too Weak To Fight’ and as was the way of the US music biz in the 60s, single success led to the need for an album. Equally, the 60s way seemed to be that the albums would consist of the hits, the B-sides, songs from the “home studio” teams and covers of then current pop and soul hits. The albums were usually hastily assembled with no thought of a theme or a concept… they were simply a way to cash in on the high profile of the singles. Both these Carter albums conform to that template.

The focus of the ‘This Is Clarence Carter’ was/is his hit version of ‘Slip Away’ and the other included hits, especially the driving ‘Looking For A Fox’, still sound good. Southern soul collectors will also enjoy a version of Jimmy Webb’s ‘Do What You Gotta Do’ and the classic southern ballad, ‘I Can’t See Myself’… as mournful as you’d expect.

The focus hit on ‘Dynamic’ was ‘Too Weak To Fight’ and amongst the other cuts, there are covers of ‘Light My Fire’, ‘I’d Rather Go Blind’ and ‘Harper valley PTA’… yet another country song requisitioned by the soul community. Highlight though is Clarence’s version of the Brill Building pop song ‘You’ve Been A Long Time Coming’ .

This new reissue also offers five previously unissued Clarence Carter recordings including ‘I’ll Be Over After A While’ – a demo that Carter recorded with erstwhile partner Calvin Scott. All are required material for southern specialists.