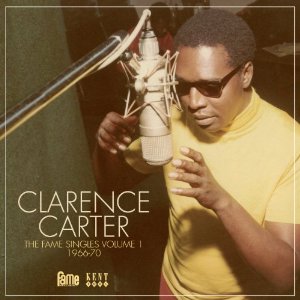 This is the first in what will be a 2 volume Kent look at Clarence Carter’s Fame singles. The 24 tracks here cover the period between 1966 and 1970 when the Montgomery-born singer/songwriter began to establish himself as a major soul contender.

Carter first came to Rick Hall’s studio in 1965 with his singing partner Calvin Scott. The duo had previously worked for a number of labels but were prepared to pay Hall for the opportunity to use his iconic studios in order to take their career to the next stage. The studio man liked what he heard and was about to sign them up for himself when Scott’s domestic disputes (his wife shot him!)and a major fall out with his singing partner left Carter trying to negotiate his own contract with Hall. At first Hall wasn’t keen, but Carter was nothing if not insistent and Hall finally took him on – using him as part of his Fame tie-up with Atlantic. Their first joint effort – the storming ‘Tell Daddy’ (later recorded by Etta James as ‘Tell Mama’) – made the R&B top 40 and more hits followed. Proper soul fans could probably name most of them – ‘Thread The Needle’, ‘Looking For A Fox’, ‘Too Weak To Fight’ and ‘Snatching It Back’ amongst them. They’re all included here and familiarity/popularity hasn’t made them any less soulful. But if anyone doubts Carter’s soul credentials let them play some of the B sides that graced the hits. Versions of ‘Making Love (At The Dark End Of The Street)’ and ‘Slip Away’ and his own compositions like ‘I Stayed Away Too Long’ and ‘Don’t Make My Baby Cry’ are all bona fide southern soul classics.

Volume 2 (released later this year) will cover the period 1970 – 1973 when Clarence Carter enjoyed his greatest success but this first volume is a fine introduction to an artist who over the years has been undervalued and underappreciated by many of the soul fraternity.