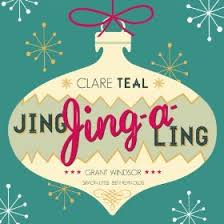 All artists have to get it out of their systems – yep the Christmas album and most come up with predictable, frankly pedestrian things that simply offer a set of expected, traditional songs in an expected, traditional way. This year it’s twice-crowned British Jazz Singer of the year Clare Teal’s turn and predictable, pedestrian, expected or traditional are the last adjectives you’d use to describe ‘Jing Jing-A-Ling’. Mind you, if you’ve seen the lady live or enjoyed any of her previous albums you’d be expecting the unexpected wouldn’t you? Maybe though you wouldn’t expect barrel-house blues on a Christmas album – or what about an Hawaiian song, or maybe a tune extolling the pleasure of whisky complete with ukulele accompaniment, or a gentle Latin swayer? Well all those flavours and more beside are here.

In fairness Clare does offer some traditional Christmas fayre within the album’s 12 tracks but even on Mel Tormé’s ‘The Christmas Song’ and the classic ‘Winter Wonderland’ the singer puts her own spin on things. For instance on ‘Wonderland’ she includes the usually neglected introduction. It brings more sense to the song while producer/arranger/long-time collaborator, Grant Windsor gets things subtly swinging. ‘The Twelve Days Of Christmas’ is given a novelty makeover (sure to be a highlight of her Clare’s Christmas shows) while the long-neglected Frank Loesser song ‘What Are You Doing New Year’s Eve’ takes the accolade as the set’s most romantic outing.

Then there’s those Christmas oddities. ‘Mele Kalikimaka’ is an Hawaiian celebration – complete with melodica and ukuleles. Those ukes are out front on Clare’s own ‘A Little Whisky’ while the lovely Latin-flavoured ‘December’ reminds us that Christmas isn’t always about snow and frost fairs. Then there’s the rollicking barrel-house blues of ‘Skating On Thin Ice’… Christmas has never sounded so rowdy. You want some classy pop too? Then ‘The Feeling’s Right’ (another Teal original) adds another dimension to the collection. And that’s the attraction of this album. It proves that Christmas can be different but at the same time the set retains just the right amount of tradition to keep that warm inner Christmassy glow glowing … and keeping it all together is Clare’s timeless, distinctively warm and believable voice. Happy Christmas!