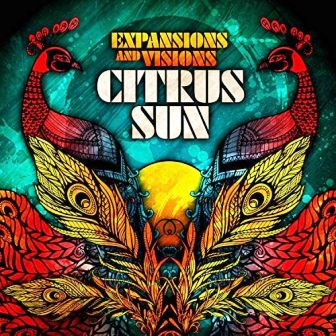 Citrus Sun is a UK music collective that first came together way back in 2000 when Incognito’s Bluey Maunick worked on an album with one of his guitar heroes, Jim Mullen. The result was the Citrus Sun long player, ‘Another Time Another Place’. Bluey enjoyed working on the critically- acclaimed set so much that he kept  the connection alive, suggesting that Citrus Sun was “the indulgent and for fun only speedboat, riding alongside my flagship, Incognito”. Two more albums followed with a line up that was always fluid but Bluey was involved throughout and more often than not, using his Incognito rhythm section as the chassis on which to build his musical ideas.

Despite the lockdown, Citrus Sun have just released this, their fourth album and once again Mr M is at the producer’s desk while his faithful Incognito team (Francis Hylton, bass; Francesco Mendolia, drums: Matt Cooper, keys and Francesco Sales, guitar) provide the band’s backbone. Jim Mullen’s back in the fold too adding his typically muscular jazzy guitar to three tracks while the new kid on the Citrus Sun block is young Indonesian harmonica player Rega Dauna. Dauna and Mullen are both featured on the lively workout that is ‘Hard Boiled’ which when released as single became a top 10 hit on the Billboard Smooth Jazz chart.

The album’s other lead-off single was the band’s cover of the oft-recorded Ashford-Simpson tune, ‘California Soul’. With Noel McKoy on vocals and a stripped down backing track, the cut not only showed where Citrus Sun currently are but also from where they draw their collective inspiration.  Those inspirations are manifest throughout the 11 tracker. ‘Back To Wonderland’ is the band’s homage to Stevie Wonder (of course) and, as you’d expect, Dauna’s harmonica leads proceedings. He also plays piano on the track. ‘Stay You’ was conceived as a tribute to Leon Ware and on the cut Dominic Glover’s trumpet is a treat while Bluey’s vocal interludes add the same kind of layred atmospheric feel that Ware often achieved both on his own recordings and those he helmed for others. Then, of course, there’s the album’s opener – a cover of Lonnie Liston Smith’s ‘Expansions’. Bluey describes the tune as “pivotal in the soundtrack of my life” and here the Citrus Sun team treat if with the respect it deserves. Long time Bluey collaborator, Valerie Etienne takes the vocal parts. Another long term colleague, Deborah Bond, duets with Bluey on the album closer – a gorgeous bossa nova, ‘Thinking Of You’ – a proper highlight to end proceedings with . But it’s only one highlight amongst many, crafted by a team of experienced, trusted, committed musicians who are confident in each other’s ability to deliver classy, sophisticated soul jazz.