CHUCK MANGIONE: ‘Journey To A Rainbow’ and ‘Eyes Of The Veiled Temptress’ (Super Bird) 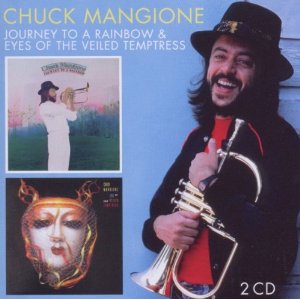 It’s hard to believe that Rochester-born New Yorker Chuck Mangione played hard bop with Art Blakey’s Jazz Messengers in the early ’60s – especially given the fact that by the 1980s, the trumpeter was playing a melodic, pop-inflected variety of the fusion style that was the precursor to smooth jazz. Two of his ’80s albums for Columbia – ’83’s ‘Journey To A Rainbow‘ and ’88’s ‘Eyes Of The Veiled Temptress‘ – have just been reissued in a ‘twofer’ package by Super Bird and find the hirsute trumpet/flugelhorn maestro (whose sartorial trademark was a fedora hat) playing music that’s a far cry from the hard bop of his youth. But Mangione had to change styles to survive – after all, when jazz was losing out commercially to rock in the late-1960s, he and many others tried their hands at fusion to reach a bigger audience (and also make better money). By the 1970s at A&M, Mangione was starting to fuse jazz with pop and in 1977, scored a massive crossover hit with ‘Feels So Good.’ The success of that record meant that Mangione was keen to further explore the pop-jazz hybrid he had helped to create with his subsequent records.

’83’s ‘Journey To A Rainbow’ was his second album for Columbia and finds Mangione blending jazz with funk and pop – but it’s really a marriage of efficiency and economic necessity, perhaps, rather than pure passion, though there’s no doubt that the flugelhorn man sounds committed, especially on the funky ‘Love Bug Boogie’ and the tasty revamp of The Jazz Messengers’ tropical-infused oldie ‘Buttercorn Lady.’ ’88’s ‘Eyes Of The Veiled Temptress’ is less satisfying aesthetically due to a more overtly ’80s production style (including a programmed drum machine on ‘That’s Nice’) even though the set is co-produced by legendary Philly songwriter/arranger/producer, Thom Bell. Bell, in fact, even writes/co-writes a lot of the album’s material, but none of it really hits the spot – the best cuts by far are the Mangione-penned title cut and the delicate ‘Sweet Butterfly.’ But while the material is lightweight and somewhat patchy, Mangione’s flugelhorn sound – rich, melodic and expressive – is consistently listenable. People into smooth jazz are advised to check out this album as Mangione is one of idiom’s founding fathers.