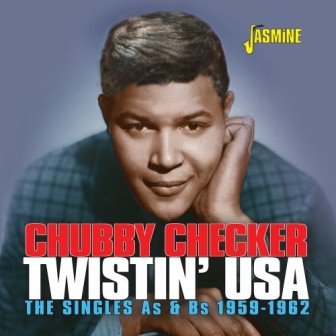 Quiz time!!! Only two records have ever topped the US singles chart on two separate occasions… one is Bing Crosby’s ‘White Christmas’, what’s the other? Well, I’m guessing you’ll be scratching your heads for some time … not the Beatles, not Elvis, not Frank Sinatra, not the Beach Boys… it’s Chubby Checker with his Cameo Parkway recording of ‘The Twist’. His souped up version of the Hank Ballard dance item hit #1 in 1960 and again in 1962 and unless you’re an old-timer (like me!) you’ll find it hard to believe the impact that that record had. In the early 60s the twist and, by definition, Chubby Checker were ubiquitous. The one time Ernest Evans – a chicken plucker from Philadelphia (honest!) –  became a super star. I can remember him being interviewed on the old BBC Home Service’s breakfast programme (the equivalent of today’s Radio 4 Today show) and the TV, newspapers and magazines were stuffed with twist features and stories. Society from top to bottom was smitten by the twist and plenty of artists fed the fad with twist songs (‘Twist And Shout’ anyone?). As you might guess Chubby was in the vanguard – offering ‘Let’s Twist Again’ (a massive UK hit), ‘Twistin’ US’, ‘Slow Twistin” (a duet with a young Dee Dee Sharp) and the wonderfully named ‘The Lose Your Inhibitions Twist’! When twist ideas dried up Mr C tried dances like ‘The Hucklebuck’, ‘The Fly’, ‘The Limbo Rock’ and ‘The Pony Time’ (a Don Covay song); then there was the catch all, ‘Dancin’ Party’.

Enjoy all those and more on this new 30 track retrospective that brings together all the A and B sides of his Cameo-Parkway singles between 1959 and 1962 and apart from the dance themed items there’s plenty more interest – most notably the “imitation” songs. Chubby began in the music business as a musical impressionist and on things ‘The Class’ and ‘Jingle Bell Imitations’ you can hear him singing things like ‘Jingle Bells’ in the manner of Elvis Presley and Fats Domino! Bizarre, yes, but never less than interesting… and of interest too is that many of the Cameo-Parkway session men playing on these tracks would go onto to work at Sigma with MFSB.

Chubby Checker, of course, went on to became a Northern hero with things like ‘At The Discotheque’ and ‘You Just Don’t Know’, sadly not included here (not within the album’s remit) and at 77 he’s still working – mainly on the Las Vegas circuit. I’m guessing most of the songs  on this album will form the core of his act!