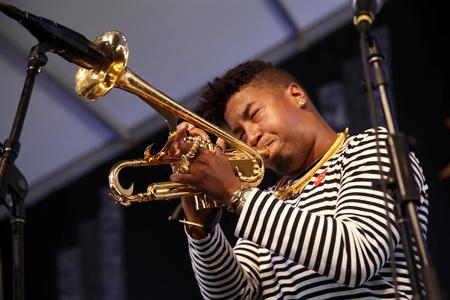 Unequivocally one of the coolest cats in contemporary jazz, this charismatic New Orleans trumpeter, composer and designer (he recently won a Jazz FM award for his innovative Stretch Music app), makes music that is forward-looking while acknowledging the past. For this particular concert, Scott didn’t appear with his usual Stretch Music band but instead united with noted Paris-based Kansas City-born alto saxophonist, Logan Richardson, to deliver an extemporized set that largely comprised what he called ‘classic jazz.’

The performance began, though, with the brooding ‘West Of The West’ – taken from the horn man’s 2015 album ‘Stretch Music’ – before Scott’s band launched into a fast and furious take on Herbie Hancock’s seminal ’60s bop tune, ‘Eye Of The Hurricane.’ Driven by Luques Curtis’s foot-tapping walking bass and Corey Fonville’s bustling drums, it featured a sparkling solo from Scott, followed by Logan Richardson and then Martinique-born Paris-based pianist,  Tony Tixier, who impressed with his dexterous and inventive improvisation.  In fact, the virtuosity of all the musicians on stage was jaw-dropping. If ‘Eye Of The Hurricane’ was a nod to jazz’s past then the next number, a new composition that was a jaunty hip-hop-influenced groove garnished with intertwining horns, went back to the future. After that, the band offered up a lengthy exploration of Coltrane’s modal classic, ‘Equinox,’ which allowed more inspired instrumental sparring between Scott’s trumpet and Richardson’s alto.

It was an experience akin, perhaps, to listening to Freddie Hubbard and Jackie McLean play together at the peak of their respective powers back in the ’60s, though, of course, Scott and Richardson bring a completely different sensibility and concept to their instruments. Indeed, with his use of delay and reverb effects, Scott creates different textures and fascinating sonorities, which were especially evident on an atmospheric version of a modal tune by his uncle, Donald Harrison, called ‘Kind Of New,’ which tipped its hat to Miles Davis. The set concluded with  Scott’s own composition, ‘The Last Chieftain,’ a churning groove characterised by intertwining melodic tendrils voiced by trumpet and sax. It brought the curtain down on a superlative show that allowed UK listeners to appreciate up close arguably the two foremost American horn players in contemporary jazz right now.