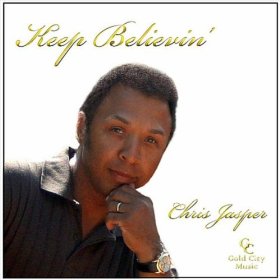 Chris Jasper was an integral and key part of the Isley Brothers in that golden period when – in the 70s and 80s, as a 6 piece – they seemed to carry all before them. Chris not only played keys for the band but he also wrote many of their classics, including ‘For The Love Of You’ and ‘Between The Sheets’… and remember too that when Isley-Jasper-Isley broke away, he was responsible for the anthemic ‘Caravan Of Love’. Since 1998 he’s worked as a solo performer through his own Gold City Music label and that’s the label for his new long player, ‘Inspired’. The album’s sub text is that Chris has been inspired “by love, by life and by the spirit” and therein lies a clue to the sound and feel of the 10 tracker. Chris Jasper, it’s clear, is in a good place. He has the love and support of a strong family (indeed the whole Jasper clan help out here – instrumentally and vocally, while son Nick has designed the CD cover!) and, importantly, he’s strong and secure in his Christian faith.

The songs on the set reflect where he’s at. Lyrically, it’s almost all optimistic with song messages that declare the beauty of both temporal and spiritual love (some songs cover both bases) while he also finds time to exhort the values of positive thinking as a path to improvement. That theme is most noticeable on the crunchy beater that is ‘Keep Believin”. It begins with the plea to “put down those guns and pick up those books” before developing into a snappy funk item with all the ingredients that made Isley classics like ‘The Pride’ and ‘Fight The Power’ so powerful. There’s more of that sound on ‘Let My People Go’ while ‘Someone’ slows things down a tad – conjuring flavours of ‘Harvest For The World’ and ‘Summer Breeze’.

But Chris Jasper has always been known for his beautiful ballads and there are some fabulous ones here. The opening, ‘Inspired, is a delicate piece of work while ‘Any Day’ is quite lovely – naive, yes… but so heartfelt. ‘Only The Lord Can Do That’ is the big set piece gospel ballad… gently yet inspiring. There’s some great mid-tempo grooves too – most notably ‘Faith’. Sonically, as you’d expect, you’re constantly reminded of the classic Isley sound… no bad thing; there’s one track though that is a little different. It’s the lengthy closing item – ‘Prince of Peace’. This one’s a much poppier piece and dipping in to it you’d be forgiven for thinking you’d hit on an old Michael McDonald album. A great track with which to end an excellent modern soul album.