CHRIS JASPER; Everything I Do (Gold City Records) 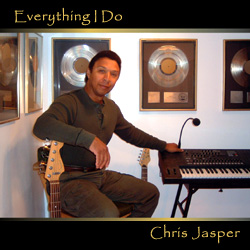 After playing a crucial part in crafting the classic 70s and 80s Isley Brothers’ sound, Chris Jasper found further notoriety as one third of Isley-Jasper-Isley. Since 1998 he’s worked on a number of solo albums and each one has been well received by the soul cognoscenti. His latest set – ‘Everything I Do ‘- has just been released on the man’s own Gold City Records and like those previous efforts it’s an honest and heartfelt collection. Not surprisingly the feel throughout has echoes of the classic Isley Brothers and Isley-Jasper-Isley sound and, listening, you’ll find yourself asking which Isley song does that particular line, lick, harmony or rhythm pattern remind you of…. but, hey, that’s no bad thing when you remember the quality of those original Isley templates.

The set boasts a number of relentless funk beaters that have structures that are similar to things like ‘Livin’ In The Life’ and ‘The Pride’. Here I’m thinking of ‘Doing My Thing’, ‘In Your Face’ and ‘Earthquake’… pile drivers all with a strange but effective built-in crunch! ‘He’s The Judge’ is slinkier but still right on the money while ‘Nobody But My Baby’ is much more relaxed – almost sing-a-long… very catchy. The LP’s best cut, though, is the title song. This one really does have all the very best of the very best of the Isley Brothers and deserves serious consideration… a quality track on a quality album from a true soul craftsman. To find out more, go to www.goldcitymusic.com