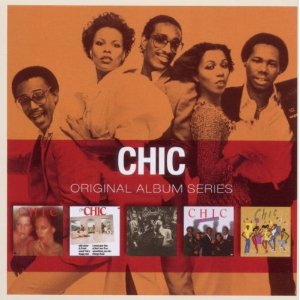 According to Chic’s co-founder, Nile Rodgers, the iconic New York band that he co-led with bassist Bernard Edwards and which burned brightly in the latter stages of the 1970s was never just a disco act – rather they were an R&B band that happened to form during the disco era. Even so, three years into their career, in 1980, Chic had been irrevocably tainted by the ‘disco’ tag and in commercial terms fell victim to the growing backlash against mirror ball culture and its music.

But just a cursory listen to the music on the five albums that constitute this new reissue affirms that Chic were several cuts above the average disco act. The group’s musicianship was exemplary and they created addictive, well-crafted grooves led by Rodgers’ scything guitar and Edwards’ elastic bass lines, with Tony Thompson keeping the beat with his taut drumming. And of course, Rodgers and Edwards penned some great songs with killer choruses and many of them have undoubtedly transcended the disco era.

Image-wise, Chic’s eponymous debut – with its front cover depicting a couple of white models with whistles in their mouths – seemed to suggest a faceless, anonymous group of session musicians, which was the case for a lot of disco acts. And indeed, with the Rodgers/Edwards/Thompson core supplemented by a lot of session cats on keys, strings and horns plus an array of lead and background singers (including the group’s first designated lead singer, Norma Jean Wright, along with Fonzi Thornton and Luther Vandross) punters could be forgiven for thinking that Chic was some kind of Big Apple musical collective. But the music on the album established Chic’s distinctive sound – and that certainly exuded a musical personality that patently wasn’t anonymous. It included the group’s debut 45, ‘Dance, Dance Dance (Yowsah, Yowsah, Yowsah),’ and the follow up, ‘Everybody Dance.’ Unlike a lot of other disco albums from the same timeframe, Chic’s debut LP wasn’t simply a case of padding out a couple of hit singles with forgettable filler. Every track was strong and two of them – ‘You Can Get By’ and ‘Strike Up The Band’ – were arguably better than the hit singles.

Come 1978, with their second LP, ‘C’est Chic,’ Chic were projecting a different image as a band – all five members appeared on the front cover, their smart attire suggesting class, elegance, sophistication and affluence. Musically, the album reflected that perception and yielded their biggest hit, the combustible dance floor anthem, ‘Le Freak’ and contained another infectious big single, ‘I Want Your Love.’ But there was much more besides – such as the funky party groove of ‘Chic Cheer,’ the slick guitar-led instrumental ‘Savoire Faire,’ and the hypnotic ballad, ‘At Last I Am Free.’

In 1979, Chic hit the groove motherlode with ‘Risqué,’ which contained ‘Good Times,’ whose pumping melodic bass line was much imitated and hugely sampled. The set showed that Rodgers and Edwards could write strong ballads as well as upbeat material – like the wonderfully mesmeric ‘A Warm Summer Night’ and the plaintive ‘Will You Cry (When You Hear This Song).’ A year later and Chic’s audience was beginning to diminish – disco was now considered passé by many and Chic’s sales exponentially declined as a result of that perception even though 1980’s ‘Real People’ was arguably one of their most cohesive LPs; it featured ‘Rebels Are We,’ ‘Chip Off The Old Block’ and the incisive title track. In 1981, Chic stripped back their sound – gone was the lush orchestration, replaced by a bare-boned clarity that emphasised that they were a real band rather than just a conglomeration of session musicians. Even though it contained one of their best ever cuts (as least to this writer’s ears) in the shape of the jazzy ‘Just Out Of Reach’ it largely fell on deaf ears. The disco inferno had finally fizzled out and Chic’s career largely faded away with it (there were two more albums in the early ’80s though they lacked the freshness, panache, imagination and guile of previous efforts).

Though this no-frills package lacks the liner notes and discographical annotation that so many collectors love, it nevertheless offers a chance to re-evaluate the work of one of the best R&B bands of the late ’70s. Over thirty years down the line, Nile Rodgers’ and Bernard Edwards’ mirror ball gems still shine brightly. (Chic fans should also investigate Rhino’s new ‘Original Album Series’ set dedicated to the LPs of Sister Sledge).