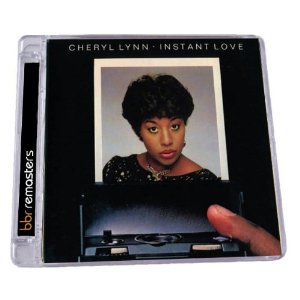 Luther Vandross was on a roll in the early ’80s. His self-produced and largely self-written debut album, ‘Never Too Much,’ was a bestseller and transformed him into hot property. As a direct consequence of his success, he helmed several studio projects for other artists, including two for Aretha Franklin (‘Jump To It’ and ‘Get It Right,’ both recently reissued by bbr) and this one for former Gong Show winner, Cheryl Lynn, in 1982. The LA singer had scored a US R&B chart topper with her 1978 debut 45, ‘Got To Be Real,’ and by the early ’80s was seeking a new direction. This Vandross-produced set didn’t yield any number one records but it is unequivocally one of the best LPs that Lynn recorded.

‘Instant Love‘ featured all the key personnel that made Vandross’s records sonically so distinctive in the ’80s: keyboardist Nat Adderley Jr, bassist Marcus Miller (who was also Vandross’s songwriting partner), drummer Yogi Horton, and backing vocalists Fonzi Thornton, Michelle Cobbs, Tawatha Agee, Brenda White and Phillip Ballou. With string arrangements from ex-Motown arranger Paul Riser, the project reeked of class. It still stands up well today, thanks to the fact that Vandross preferred to use ‘real’ musicians over the nascent machine technology, which began to infiltrate the R&B world in the early ’80s.

Cheryl Lynn’s histrionic vocal style isn’t every one’s cup of tea, perhaps, but she’s in terrific form on this set and is complemented by material and a production style that complements her idiosyncratic delivery. The opening title cut is a catchy dancer with an irresistible hook. Hewn from a similar type of musical cloth is the superior ‘Sleep Walkin’,’ ‘Look Before You Leap,’ and ‘Say You’ll Be Mine.’ Punctuating the dance floor workouts are some fine ballads, including the lovely Tawatha Agee-penned ‘Day After Day,’ a dreamy song featuring a trilling obligato flute and some stratospheric high notes from Lynn. The piece de resistance, though, is a sensuous interpretation of Marvin Gaye’s ‘If This World Was Mine,’ which is reconfigured as a soulful duet with Luther Vandross.  The bonus material isn’t much to shout about (45 edits of ‘Instant Love’ and ‘If This World Was Mine’) but that doesn’t detract from the fact that this is a fine reissue of one of the better soul albums from a female singer in the early 1980s.