CHERRY BOOP AND THE SOUNDMAKERS; The Way I Am (Ray Muse) 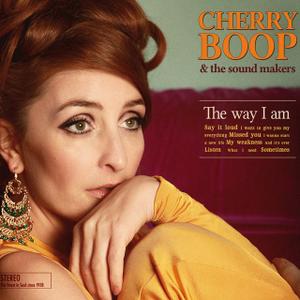 The wonderfully named Cherry Boop is a Spanish soul singer who fronts a tight little soul combo called The Soundmakers. Her album ‘The Way I Am’ was released on the continent in May but underground interest, especially from taste making DJs, has meant the 11 tracker’s been given a wider release.

The tune that’s been getting all the attention is a wonderful ballad called ‘I Want To Give You My Everything’. Listening to the sweet Carl Douglas cover, you’d be forgiven for thinking that you’d stumbled across an old Philly outtake from someone like Barbara Mason and you know what… you wouldn’t be that wrong. Cherry’s track (like a lot of the album) was “sweetened” in Philadelphia…. in Bobby Eli’s Grooveyard studio no less, and for some extra soulfulness the song features the voice of one-time Delfonic William Hart who croons beautifully with Ms. Boop. It’s a great pop/soul confection… and there’s a lot more besides that.

‘And It’s Over’ and ‘Sometimes’ are two more decent ballads with the former channelling the sounds of the Southern studios, while ‘Listen’ and ‘What I Need’ are funkier and grittier. I’m confident, though, that most soul collectors will prefer the lighter, floating dancers like the opener, ‘Say It Loud’. This one is as convincing a Motown pastiche as you’ll ever hear. Cherry cites Tammi Terrell and Brenda Holloway as chief influences but this one has more of an early Supremes flavour to it…. very H-D-H. ‘Missed You’ will also please the Northern crowd, while ‘My Weakness’ has a feel of ‘Turn Back The Hands Of Time’ to it…. not a bad starting point. And that’s the attraction of this collection; every tune starts off somewhere in soul’s history but as they develop they take on their own special identity.

Worth investigating, especially if you’ve been digging Robin McKelle and the Flytones.