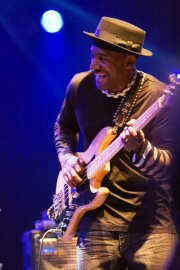 Though jazz is unequivocally at the core of the Cheltenham Jazz Festival, its appeal has always been broader due to the varied and eclectic nature of the acts that customarily appear there – it was a case of business as usual, then, when this year’s variegated line up was announced although there was a radical overhaul in terms of the venues that the festival utilised. The Town Hall and Everyman Theatre were consigned to the past as a result of the festival finding a new self-contained base at Montpellier Gardens, where it used new and temporarily-erected venues like The Big Top (a huge circus tent with a stage inside) and the Jazz Arena as its main locations. Though for hardened festival veterans – like myself – it took a little while to adjust to, overall it seemed a vast improvement on the previous arrangements where punters had to trek some distances to different venues.

Thankfully, the Daffodil Restaurant hadn’t been sacrificed in the changes and played host to a couple of outstanding British singers – Jacqui Dankworth and also the up-and-coming ZARA MCFARLANE. Though diminutive in stature, McFarlane – signed to Giles Peterson’s Brownsville label – proved she was a big talent. Her repertoire included timeless standards such as ‘Night & Day,’ ‘Round Midnight’ and ‘My Favourite Things’ as well as some strong original songs; among them the mellow ‘Chiaroscuro’ and ‘Love’s Dream.’

The ‘big guns’ didn’t disappoint either. MARCUS MILLER (pictured) – accompanied by a band of young lions, including Maurice Brown on trumpet – served up a tasty 90-minute platter of absorbing, funk-inflected jazz. Most of the material was taken from Miller’s forthcoming new album, ‘Renascence,’ and the titles included ‘Mr Clean,’ ‘Detroit,’ and ‘February.’ He also slipped in a revved-up revamp of ‘Tutu,’ the classic 1986 track he wrote for Miles Davis. Occasionally, he showed his prowess on the bass clarinet but what people had really come to hear was his electric bass playing. On that score, he didn’t disappoint and delivered a stupendous masterclass in his signature slapped bass technique that resulted in a standing ovation at the end.

An hour or so before that in the same venue – The Big Top – another American, singer GREGORY PORTER, was raising the roof. Porter was accompanied by a UK band – including the tremendous Ben Castle on saxophone – and performed a mixture of original album cuts and jazz standards. JAMIE CULLUM – an ardent and vociferous champion of Porter – joined the hirsute singer for a rendition of the marvellous Motown-esque ‘On My Way To Harlem’ and also played piano on a duet with Porter of the ballad, ‘Gran Torino’ (the song Cullum penned for the Clint Eastwood-directed movie of the same name). Arguably the best cut was ‘1960 What?’ a powerful message Civil Rights song taken from Porter’s debut album, ‘Water,’ which allowed the singer’s gospel roots to shine through. Certainly, on the evidence he provided at Cheltenham, Gregory Porter is one of the best singers around at the moment.