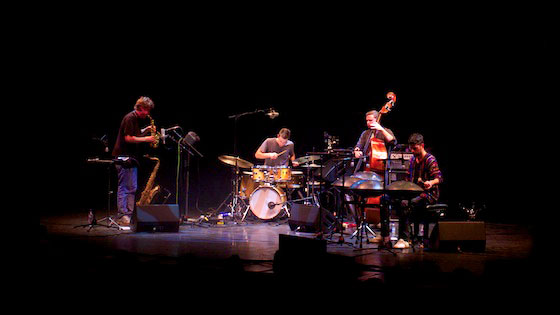 Cheltenham Jazz Festival is not solely aimed at serious jazz heads – from its inception fifteen years ago it has endeavoured to be eclectic and offer a diverse array of musicians. And this year was no exception. With the inclusion on the bill of R&B man, James Hunter, soul singer Andreya Triana, hip-hop acts Roots Manuva and Bonobo, bohemian chanteuse Lucinda Belle, electronica duo Lamb and Cuban ensemble Sierra Maestra, the festival was guaranteed to satisfy the most adventurous and discerning of musical palettes. But jazz was what many folks attended the festival for and on that score, it didn’t disappoint, representing jazz in all its forms and multitude of different hues….

Veteran diva DAME CLEO LAINE – now in her 83rd year – opened the festival and sounded in fine fettle vocally. Laine is considered jazz royalty in the UK and another, much younger, musician, who performed at the festival, is the son of Hollywood ‘royalty.’

He is, of course, KYLE EASTWOOD, son of legendary movie actor/director, Clint Eastwood. A supremely talented bass player, 42-year-old Eastwood fronted an exciting young band and mainly performed material from his excellent new album, ‘Songs From The Chateau.’ Driven by the superbly syncopated drumming of Martyn Kaine and the impressive twin horn frontal attack of trumpeter Graeme Flowers and saxophonist Graeme Blevins, Eastwood served up a dazzling showcase of imaginative compositions that melded straight ahead jazz – like the propulsive opener ‘Marciac’ and the exuberant ‘Café Calypso’ – with a smidgeon of ’70s style funk.

Rock legend, John Paul Jones – the bassist of Led Zeppelin – was a surprise addition to drummer Martin France’s band, SPIN MARVEL, who weaved a dense matrix of improvised free jazz that left some people entranced and others bemused. More on the money was PHAROAH SANDERS, once in the vanguard of the free jazz movement.

Now 70 and looking like some ancient, magnificent, African god, the venerable saxophone legend led a quartet that paid homage to his old friend and onetime boss, John Coltrane. Opening with a febrile rendition of Coltrane’s ‘Giant Steps’ and followed by a delectable interpretation of ‘Naima,’ Sanders’ tenor saxophone tone ranged from sounding fierce and searingly raspy to tender, lyrical and melancholic. He probably spent more time off stage than on, taking a breather in the wings and watching his band – which included superb pianist, Jonathan Gee – demonstrate their individual skills. Coltrane was again referenced by an uptempo version of ‘My Favourite Things’ and for those that were disappointed that Sanders had neglected his own quite substantial back catalogue, the indelible chord sequence to his most famous number, ‘The Creator Has A Master Plan,’ was finally heard – but only briefly, functioning as the great man’s outro.

If Sanders disappointed some punters, then there were plenty of other acts that compensated. One was OVERTONE QUARTET – a fabulous US supergroup featuring saxophonist Chris Potter, pianist Jason Moran, drummer Eric Harland and bassist Larry Grenadier (deputising for an absent Dave Holland), whose potent musical prowess and onstage telepathy was a thing to marvel at.

Interestingly, the next day Grenadier and Potter could be seen checking out PHRONESIS, perceived by many as one of the hottest trios in contemporary jazz. Based in the UK and led by the superb bassist Jasper Hoiby, the band showcased new material like ‘Democracy’ as well as older tunes such as ‘Happy Notes’ and ‘Eight Hours.’ Their performance certainly set the festival alight – as did a combustible set by the energetic NEIL COWLEY TRIO, who were augmented on some songs by the Julian Ferraretto string quartet. In fact, the presence of strings brought out a new dimension in Cowley’s music, giving it a sense of gravitas, sensitivity and cinematic luminosity it had previous lacked. The set included ‘Radio Silence,’ ‘Clumsy Couple,’ and, of course, an ebullient version of the group’s best known tune, the anthemic ‘His Nibs.’ Cowley – arguably the hardest working man in jazz, given the sheer physical power, energy and passion he injects into his performances – gave a truly dynamic performance, which was reflected in the standing ovation he and his band received at their show’s close.

Also noteworthy was the festival’s penultimate concert by London’s much-feted PORTICO QUARTET, who had made a big impact at Cheltenham two years earlier. Comprising saxophonist Jack Wyllie, bassist Milo Fitzpatrick, drummer Duncan Bellamy and hand drum maestro Nick Mulvey, the Mercury Music Prize-nominated foursome have dissolved musical barriers with their breathtakingly beautiful sound that draws inspiration from not only jazz but African music and US composer Steve Reich’s minimalist aesthetic. Their distinctive sonic identity is defined by the group’s employment of an instrument called a hang; a bell-like percussion instrument that looks like two woks glued together but produces a mellow, almost gamelan-like, otherworldly sound. Although the hang has become the group’s calling card, significantly their Cheltenham concert began with the group in a trio configuration minus hang player, Mulvey – Duncan Bellamy explained that Mulvey would join them later in the set as he was leaving to pursue a solo career and the trio began by playing new and as yet untitled material. Featuring delays, samples, percussive loops and electronic wizardry – created in real time and mainly controlled by drummer, Bellamy – the new music could be described as trance jazz: a mesmerising blend of atmospheric electronica, propulsive beats and live instruments. Mulvey joined the other members after four numbers and they performed some of the entrancing hang-dominated material – like the beguilingly ethereal ‘Clipper’ – that they forged there reputation on. Mulvey’s presence and his hang-playing will definitely be missed but Portico Quartet – who haven’t announced if they’re seeking a replacement yet – are intent on pursuing new musical horizons: given their past history, their journey should be a fascinating one.

Overall, a fabulous festival – and next year’s will have have to be extra-special if it’s going to surpass it.