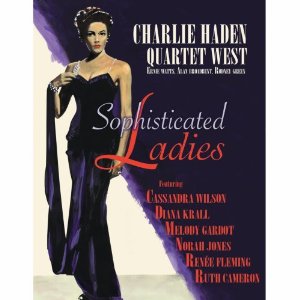 The Charlie Haden West Quartet have been making lovely music for 25 years now, but before that bassist Haden had played with people as disparate as Ornette Coleman and Keith Jarrett. Through all the vagaries of his career, Haden has always been devoted to melody and here he revels in that passion by selecting a dozen songs from what some call “the great American songbook”. But like a vinyl crate digger, he’s eschewed the well-known and the care-worn to work with 12 lesser known and rarely recorded items and to help him flesh out his ideas he’s brought in six female vocalists – amongst them his wife Ruth Cameron, the opera singer Renee Fleming and the current queen of jazz vocals, Diana Krall.

Krall takes lead on Gordon Jenkin’s ‘Goodbye’ and the drama she brings to it is enhanced by sombre strings. Indeed the strings (two different ensembles from New York and Los Angeles) are a key feature of this album. Those strings are particularly effective on the opener ‘If I’m Lucky’ and the Johnny Mercer-penned ‘My Love And I’. The vocal on that first is taken by Melody Garret whose whispering take is brought into the sweetest relief by the piano of Alan Broadbent and the sax of Ernie Watts. Cassandra Wilson is vocalist on the latter and though the tune dates back to the 1954 movie, ‘Apache’, this is the first time the lyrics have been recorded. The other featured vocalist is Norah Jones who handles Harold Arlen’s ‘Ill Wind’ in her usual understated way.

The album also offers six instrumentals of which Duke Ellington’s ‘Sophisticated Lady’ stands out. It’s a quiet, timeless version and that really is the album’s USP. There’s a quietness and love about everything and it’s maybe for that reason that the LP has been no. 1 in the French jazz charts for quite some time.