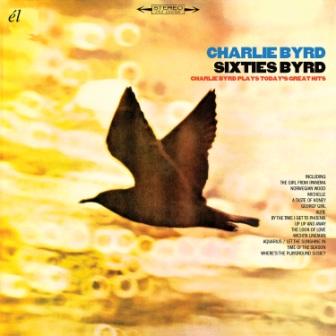 Charlie Byrd was once described by eminent jazz critic Leonard Feather as “the most versatile guitarist ever to play jazz”. Many might argue with that but it is undisputable that in the late fifties/early sixties Byrd was a key player in bringing Brazilian music into mainstream culture and (along with people like Stan Getz) helping make the bossa nova hugely popular.

If you’re not that familiar with Byrd’s work, then this new 24 track compilation from El Records will serve as a great introduction to his talents. The album’s music is taken from the guitarist’s tenure with Columbia Records and consists of his versions of well-known sixties hits. Like many sixties jazzers, Byrd regularly covered contemporary hits and you can probably guess from whose catalogues he chose his repertoire… yep, amongst the selections are tunes from Jimmy Webb, Burt Bacharach and a band called the Beatles! The Fab 4 tunes to get a gentle jazz guitar makeover are ‘Girl’, ‘Norwegian Wood’, ‘Michelle’ and ‘A Taste Of Honey’ (yes, we know this wasn’t a Beatle original, but they helped make the song popular). The Webb songs are ‘Up Up And Away’, ‘By The Time I Get To Phoenix’, ‘Wichita Lineman’, ‘Where’s The Playground Susie’ and ‘Galveston’ while the chosen Bacharach tunes are ‘Alfie’ , ‘The Look Of Love’ and ‘Who Is Gonna Love Me’. Other inclusions are the Seekers’ ‘Georgy Girl’, the Zombies’ ‘Time Of The Season’ and Bobby Hebb’s ‘Sunny’ – possibly one of the most covered tunes of all time.

Byrd gives them all his own distinctive, gentle acoustic guitar treatment and given what we said up top you won’t’ be surprised to learn that many are given a distinctive Brazilian flavour. However if you want the full bossa nova hit, then there’s also versions of ‘The Girl From Ipanema’, ‘Corcovado’ and ‘Meditation’ – classics from Jobim canon!

Maybe this collection won’t prove Leonard Feather’s assertion – its remit’s a little limited – but it does show that Byrd had a unique signature sound – gentle, easy-on-the-ear and hugely influential (think Earl Klugh).