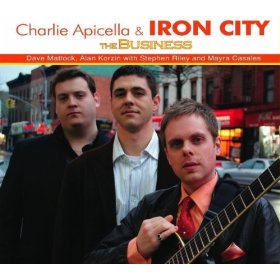 Charlie Apicella is an American jazz guitarist who was weaned on the sounds of Grant Green and Wes Montgomery. Fronting the Iron City trio, he wears those influences proudly, crafting a solid soul-jazz set that could easily come from those golden days of the 60s. Moreover he’s not afraid to tackle the music of his heroes. Here one of the standouts is a take on Grant Green’s ‘Donny Brook’. Apicella and his team (Dave Mattock on Hammond and drummer Alan Korzin) make it a real swinging affair and there’s more of the same joyous approach on a cover of Ben Dixon’s ‘Cantaloupe Woman’ and a take on Sonny Stitt’s ‘Blue String’. On both (and indeed throughout) the trio are augmented by Stephen Riley on tenor and the percussion of Mayra Casales who’s to the fore on the Latin–esque rhythms of Stanley Turrentine’s ‘Stanley’s Time’.

The album’s other big cover is a wonderfully bluesy treatment of Elvis Presley’s ‘Can’t Help Falling In Love’… you’d hardly recognize it from the ‘Blue Hawaii’ original… and that’s no bad thing. The album also boasts four original tunes. The best – and most atmospheric – is ‘Ironicty’; but they all capture the authentic soul-jazz feel… with much of the credit for that due to the magic of Mattock’s Hammond stylings. You can find out more about this album @ www.ironcityjazz.com