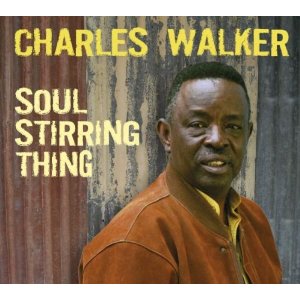 The blues have never been too far away from authentic soul music, but sadly the tradition seems on the verge of extinction. A number of artists though are valiantly fighting a rearguard action and amongst them is Charles Walker. Anoraks will know he debuted way back in 1959 with his group The Daffodils, who morphed into Little Charles and the Sidewinders when Walker decamped to New York from Nashville. After the Sidewinders, he recorded for numerous small labels and enjoyed solo success in Europe where he became a draw on the blues festival circuit. More recently Charles has worked with a funk band that go out under the name of the Dynamites but the blues have always beckoned and a deal with all round blues activist, Fred James, has led to this – Walker’s latest solo album. The 14 tracker is a solid set of old school, blues-based soul with the title cut standing out with distinction. It’s a gritty roller of a song with a catchy chorus enhanced by the harmonic backing vocals of Mary-Ann Brandon and the chunky guitar riffing of the aforementioned Mr. James. The album’s other musician is organist Billy Earheart of the Amazing Rhythm Aces and he adds authentic Hammond sounds to cuts like ‘Third Time’s A Charm’ and the almost country ‘Tomorrow Night’. Blues fans will find plenty of authentic sounds here – notably the Stan Webb (remember Chicken Shack?) penned ‘The House That Love Lives In’ but elsewhere Walker offers surprising twists to the format on things like ‘My Buddha’ and Tom Waits’ ‘San Diego Serenade’. Both are interesting if unspectacular and that’s the issue with the album. It lacks one big song – one big production. With just four musicians the music has an air of limitation about it. Budgetary constraints probably ruled out the use of a brass section which might just have lifted some of the songs. Vocally, though, Walker is convincing throughout. Interestingly, in his more restrained moments you’d be forgiven for thinking this was an album from UK blues-rocker Chris Rea… and that’s the irony isn’t it? If this was a Chris Rea album it would be attracting all kinds of media attention. Here, though, we have the real deal and if that real deal does it for you, ‘Soul Stirring Thing’ is worth some kind of investigation.