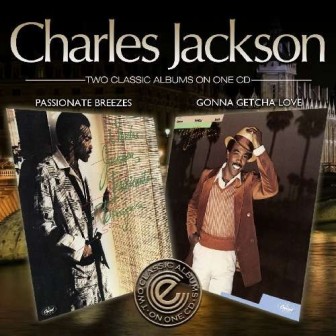 For a time in the late 70s Charles “Chuck” Jackson was a hot soul property and tipped for great things. Born in South Carolina, Jackson got into the music business when he joined Jerry Butler’s famous Chicago writers workshop. There he met up with another aspiring song smith, Marvin Yancy, and the pair promptly established a four piece vocal group as a vehicle for their songs. That group, The Independents, enjoyed some success before surprisingly folding and the Jackson/Yancy team went back to song writing – eventually striking gold when they teamed up with Capitol star Natalie Cole for ‘This Will Be’. Capitol was so impressed with that song (and several others) that they signed Jackson as an artist and they had him record two albums which have just won first time CD reissue on Expansion in “twofer” format.

1978’s ‘Passionate Breezes’ was produced by Yancy and the veteran, Gene Barge and the set is best and rightly remembered for the title song. ‘Passionate Breezes’ is a classic Quiet Storm ballad… indeed it helped define the genre and it still sounds great today. Testament to its beauty is the fact the Dells (who knew a thing or two about decent ballads) cut a version of it too. Other highlights include a medley of Jackson’s own ‘I’m In Heaven’ with Billy Preston’s ‘You Are So Beautiful’. Surprisingly – considering Jackson was such an acclaimed writer – there’s also a cover of Rod Stewart’s ‘Tonight’s The Night’… odd, but odder is the fact that on the follow up LP, ‘Gonna Getcha Love’ there’s only one Charles Jackson song, the gently insinuating ‘I Really Want You’. Most of the other tunes are down to producer Gavin Christopher (must’ve needed the royalties). His ‘Just For Your Lovin” is worth checking out though – a decent, sophisticated, sedate dancer. There’s also a great Sam Dees’ number – the mournful ‘For The Sake Of The Memories’.

Neither album fared particulaty well and for reasons never fully explained Jackson faded as an artist and went back to writing – achieving notable success with songs he pitched at Whitney Houston. Apparently he now lives in comfortable retirement in Los Angeles… yep, those royalties sure provide a decent pension pot!