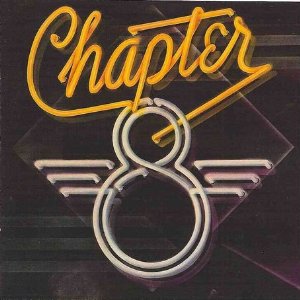 Here’s the album that launched songstress Anita Baker’s career back in 1980. The Detroit-born chanteuse was the co-lead singer of local Motor City group, Chapter 8, led by guitarist and aspiring producer, Michael J Powell. When Baker’s solo career took off with her second album and Elektra debut, ‘Rapture,’ in 1986, soul fans eagerly tried to track down copies of Chapter 8’s eponymous debut, and ended up shelling out forty or fifty quid for it (this writer included!). It came out briefly on CD some years ago but has been out of print for some time. Now, the ever-resourceful Expansion label, have put it back in circulation.

Chapter 8 originally began life several years before their first album was released. Back in ’72, Michael Powell put together a band to back up big acts visiting Detroit. They drafted in singer Carolyn Crawford, who was later replaced by Barbara Love when the former went on to work with Bohannon. Baker joined the group in the late-’70s, just prior to them signing with Ariola in ’79. The group’s debut didn’t make a lot of noise back in the day though listening to it now, it hasn’t dated too badly.

Basically, it’s a blend of sweetly soulful ballads and mirrorball dance floor burners. The killer cuts are the set’s singles: the tender slow jam, ‘Ready For Your Love,’ where Baker duets with the excellent Gerald Lyles, and ‘I Just Wanna Be Your Girl.’ Both songs show off Baker’s potential as an expressive balladeer (the latter also anticipated Baker’s solo direction). A Gerald Lyle-led cut, the mid-tempo ‘We Need Love,’ is also noteworthy, sounding reminiscent of the kinds of songs that Peabo Bryson recorded in the late-’70s. Lyles (who sounds like a cross between Donny Hathaway and Peabo Bryson) also duets with Baker on the breezy, joyous dancer, ‘Let’s Go Together,’ which closes the album. The group’s versatility is evidenced by their ability to move up several gears and get funky, especially on the disco-inflected ‘Come On Dance With Me,’ the turbo-charged ‘Come And Boogie’ and the vibrant opener, ‘Don’t You Like It.’ Not quite as successful a slightly pedestrian dancer with bad lyrics, ‘I Go Disco,’ though it’s got some good horn charts.

Ariola dropped the band not long after the album was released – among their reasons was their criticism of Baker, who they claimed, couldn’t sing. Well, Baker had the last laugh – she quit the group, signed with Otis Smith’s Beverley Glen label and the rest was history. Chapter 8 didn’t fare too badly, either, returning in ’85 (also on Beverley Glen) with the fantastic ‘This Love’s For Real’ LP (let’s hope that gets released on CD someday soon). Well worth adding to your CD collection.