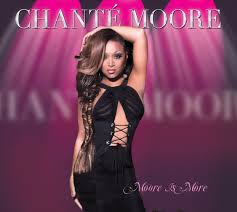 In the States California’s Chanté Moore is a major R&B star. Her status rests on seven well-received albums and a high media profile – even higher right now thanks to a prime time TV show called ‘R&B Divas, L.A.’ This new album will add to her notoriety since it’s an almost perfect contemporary American soul/R&B artefact. ‘Moore Is More’ covers all the bases in a polished and professional way… the way that the Stateside buyers prefer. Here there’s the big R&B bangers in the style of Beyoncé (‘Doctor, Doctor’ and ‘On And On’); there’s the jittery falsetto-fuelled ballads à la Mariah Carey (‘Talking In My Sleep’); there’s the kind of big set piece, angst-fuelled slowie that Whitney Houston did so well (‘Don’t Make Me Laugh’); and just to show that despite the glamour and slickness, Chanté’s still a church-goer, there’s a couple of gospel items (‘Giving You My Always’ and ‘Jesus, I Want You’). If that’s not enough variety then right at the end she throws in a cover of a lounge jazz standard – ‘Cry Me A River’. In fairness everything is flawless and Ms M’s soaring vocal range is an awesome instrument. However, I’m left wondering who exactly is Chanté Moore? And what kind of a singer is she… or does she want to be?

In the UK and Europe Chanté Moore’s best remembered for her dance floor smash ‘Straight Up’ which was omnipresent at around the turn of the millennium. That was an uncomplicated and honest call to the floor. People accepted the singer for what she was and, interestingly, as she’s diversified, she’s failed to make much impact in European markets. Still, my guess is that that little problem won’t cause Moore or her people too many sleepless nights. The US middle class, middle–aged record buyer is the core market and they’ll be delighted by this slick, multi-faceted long player.