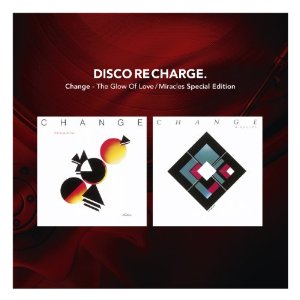 The UK-based Harmless label has launched a new spinoff to its acclaimed ‘Disco Discharge’ compilation series called ‘Disco Recharge,’ which is devoted to reissuing classic albums from the mirror ball era. The best title in the first batch of ‘special edition’ reissues is this one, a 2-CD set that comprises the group Change’s first two LPs from 1980 and ’81. As well as those original albums (which can be found back-to-back on CD 1), there’s a bonus CD packed with a slew of different mixes (including single mixes, edits and extended versions). It all adds up to a fantastic package for devotees of early ’80s disco-soul.

For those that don’t know, Change was the brainchild of Guadeloupian producer Jacques Fred Petrus and his Italian business partner, Mauro Malavasi. Basically, the group was a faceless, studio-bound entity that recorded their backing tracks in Italy (assembled by Davide Romani) and then sent them over to the States where A-list Big Apple session singers (such as Luther Vandross and Jocelyn Brown) added their vocals. It was a method that worked extremely well and Change – along with BB&Q Band and High Fashion, two other ‘bands’ created by the Petrus-Malavasi axis in the same era – used the music of Nile Rodgers’ and Bernard Edwards’ outfit, Chic, as a sonic blueprint.

Change’s debut set on WEA, ‘The Glow Of Love,’ is a classic disco-soul album and includes three incredible tracks – the stupendous title song, which features a brilliant Luther Vandross, ‘Searching’ (another Vandross-fronted gem), and ‘A Lover’s Holiday,’ the latter led by a young Jocelyn Brown (when she was known as Jocelyn Shaw). Brown also takes lead on the excellent ‘It’s A Girl’s Affair’ and ‘Angel In My Pocket’ while the album’s moody closing cut, ‘The End,’ is a robotic instrumental that is pure Euro disco.

Luther Vandross’s solo career was just about to take off (he’d signed to Epic in 1981) when Change started recording their next album, ‘Miracles,’ so they recruited an altogether different style of male vocalist – the more earthy, darker-toned soul man, James ‘Crabs’ Robinson. The group’s signature sound, though, remained intact and the heavy Chic influence remained; it’s clearly audible in cracking dance-oriented cuts such as the bass-driven ‘Paradise’ and the elegant ‘Hold Tight’ (a track that sounds like an outtake from Chic’s ‘Take It Off’ LP from ’81). That cut (apparently written with Vandross in mind) is fronted by session singer, Diva Gray.

By contrast, husky-voiced James Robinson brings a full-blooded gospel-soul approach to the slow ballad ‘Stop For Love’ and also graces the Chic-esque dancer, ‘Your Move.’ He also injects some deep soul feeling on the super-slick ‘Heaven Of My Life,’ a track that’s also distinguished by a tremendously sinuous unison bass/guitar riff. Robinson shines again on the album’s closing title cut, which rounds off what is a classic example of disco-soul. A bonus CD comprising seventeen different mixes of material taken from both albums makes this a very desirable reissue indeed.