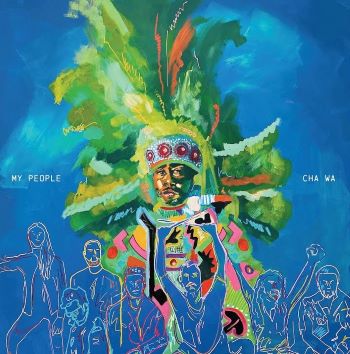 With a musical core of Joseph Boudreaux on vocals, drummer/ founder Joe Gelini, guitarist/musical director Ari Teitel, Aurelien Barnes, the trumpeter and percussionist and keyboardist Andriu Yanovski, Cha Wa is a modern New Orleans-based band with a definite purpose. Their mission statement is to carry the torch for the traditional sounds of the Crescent City but – and this is important – though they want to help preserve musical tradition, they also know that to survive, the music needs to adapt, to move on, to evolve. Boudreaux says: “With New Orleans music, you have to keep the traditions, it’s rooted in tradition. You add your originality and connect to those roots.” With that in mind the collective has formulated a sound that skilfully melds New Orleans’ jazz roots with Cajun and Mardi Gras Indian traditions – all generously garnished with Meters style funk, second-line brass, hip-hop and smooth soul. It’s an intoxicating cocktail that was first unveiled on their 2018’s Grammy-nominated ‘Spyboy’ album and now Cha Wa continue their odyssey with ‘My People’.

The album was heralded by the title track which was released as a single in January. It boldly, brashly and beautifully encapsulated the Cha Wa sound and philosophy. It was polyrhythmic, heavily percussive and shuffled along with classic Mardi Gras Indian sounds and chants; the vocals were passionate and soulful and everything was underpinned by a heavy bass line and storming brass fills and solos. And, with odd tweaks and embellishments here and there, that’s the story of the whole album. Funkateers will relish ‘Wildman’, ‘Bow Down’ and ‘Uptown’ – all as true to the spirit of classic funk as anything created by modern funk bands. ‘Firewater’ and ‘Second Line Girl’ are huge percussive romps while a cover of Bob Dylan’s ‘Masters Of War’ is properly funerary… a nod to another classic New Orleans music tradition. Most “authentic”, traditional New Orleans flavour is the LP’s final track – ‘Shallow Water’. This one was recorded live at the city’s famous Handa Wanda’s Ballroom. It’s a modern take on the traditional call and response chants of the Mardi Gras Indians… think ‘Iko Iko’.

That leaves the album’s outstanding soul offering… ‘Love In Your Heart’. With a beautifully controlled soul vocal from Angelika “Jelly” Joseph, it’s a sumptuous slice of feisty, vintage soul music that will sweep you along… a lovely foil to the funk that surrounds it.

Cha Wa’s ‘My People’ album is out now and by the way, that name, “Cha Wa”, is, like “Iko, Iko”, a traditional New Orleans Indian chant.