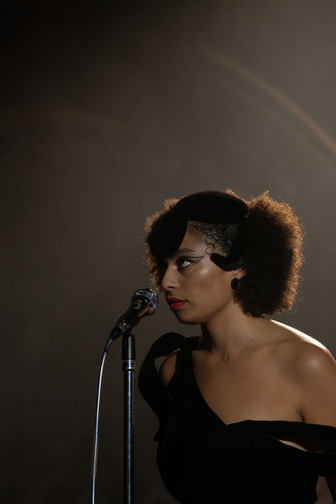 Some performers come out on stage with all guns blazing, pulling out all the stops on their opening song to get an audience’s full attention. But that isn’t the case with BRIT award winner Celeste, who on the evidence of this streamed concert film compiled from five recently sold-out nights at London’s Union Chapel, prefers a subtle, more low key approach. In fact, the first uptempo song – an impassioned reading of the uplifting “Stop This Flame” – doesn’t arrive until we’re halfway through the show. Celeste, then, is no slave to showbiz convention. And her voice, too – a mixture of Billie Holiday, Amy Winehouse and even Bessie Smith, but all filtered through her own sensibility – is unusual in an age of identikit R&B and pop singers.

Celeste in concert is much jazzier than her chart-topping debut album ‘Not Your Muse’ suggests and with her long, flowing red dress and matching floral hat, looks like she’s stepped out of the 1940s. She begins with ‘Ideal Woman,’ a bittersweet jazz ballad that finds her voice complemented by a mournful cello. After that, she’s in no hurry to up the pace, seemingly luxuriating in the intimate ambience of the venue. Ballad after ballad follows – from ‘Lately’ to the shimmering  ‘Both Sides Of the Moon and the poignantly plaintive ‘Beloved’ – but none of the songs pall or cause restlessness in the audience; they are revelling, like this reviewer, in the compelling drama that Celeste’s voice and lyrics convey. But when she does decide to go up the gears, as on the aforementioned ‘Stop This Flame’ and the retro-soul flavoured ‘Love Is Back,’ she shows that she can pack a punch in terms of stage dynamism.

Both the audio and picture quality of ‘Live From London’ are exemplary and to give the film a more immersive dimension, director Raja Virdi intersperses the songs with interludes of backstage footage that allows us to see Celeste ruminating on love, life and music as well as interacting with her band and going through rehearsals. It presents an insightful portrait of a 27-year-old singer who’s sweet and bubbly but also determined to be the best she can be.

As good as she undoubtedly is, Celeste Epiphany Waite is still a work in progress as far as her artistry goes. Though she hasn’t reached her peak yet – and that will come with time as she evolves – this engaging, enjoyable film captures a supremely talented young artist beginning to blossom.

Watch ‘Live From London’ at LIVENow