CAROLYN FRANKLIN; If You Want Me (bbr) 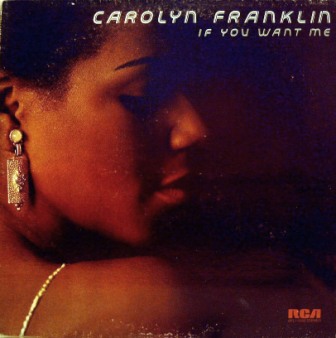 Carolyn Franklin (and Erma too) lived in the shadow of her famous older sister, Aretha. Yet when Carolyn made her secular music debut (for Lloyd Price’s Double L label in 1963) she went out under the name “Candy Carroll”. A couple of singles failed to register, so a disillusioned Carolyn re-grouped and divided her time between singing backup vocals for Aretha and working a day job at the US Post Office. She also found time to write songs and a number of her tunes were recorded by big sis – notably ‘Save Me’ and the quite lovely Aretha classic ‘Ain’t No Way’. Song-writing success brought Carolyn to the attention of RCA Records and she debuted for that label in 1969 with the LP ‘Baby Dynamite’. Two more albums followed – ‘Chain Reaction’ and ‘I’d Rather Be Lonely’ but none were more than moderately successful. A fourth album was recorded – ‘From The Bottom Of My Heart’ – but when the producer, Jimmy Radcliffe (yes, the ‘Long After Tonight Is All Over’ man) died suddenly, the LP was shelved and Carolyn went back to working with Aretha, penning the massive hit ‘Angel’ for her. In 1976 Salsoul records started negotiations to sign the youngest of the Franklin sisters and it was probably this that encouraged RCA execs to release the lady’s shelved album, though they decided to rename it ‘If You Want Me’ and this wonderful example of mid 70s sweet soul has just won reissue on bbr Records.

The set opens with a lovely, lilting ‘From The Bottom Of My Heart’. Produced by Wade Marcus, it’s a great little tune and though even Carolyn admitted she lacked the passion of Aretha, great songs like this one don’t demand histrionics – just a sweet soul voice, which Carolyn sure had. Other highlights include two Sonny Sanders-helmed cuts – ‘Sunshine Holiday’ and ‘You Can Have My Soul’ while Jimmy Radcliffe’s title cut is noteworthy too. The set’s big cover is a melancholic take on the Philly chestnut ‘You Are Everything’ and Carolyn does a good job and if you want a great 70s soul ballad try ‘I Can’t Help My Feeling So Blue’

Despite’s the set’s excellence it failed to register (too darn soulful for the disco crazy mid 70s?) and sadly Carolyn’s proposed liaison with Salsoul bore no fruit. ‘If You Want Me’ in fact turned out to be Carolyn Franklin’s last solo album. She continued doing bvs for Aretha but tragically she contracted breast cancer and died at the ridiculously young age of 43 in 1988. ‘If You Want Me’, therefore, stands as a fitting tribute to a long neglected talent.