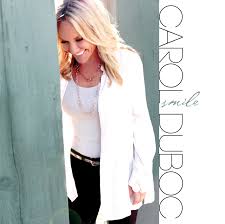 Carol Duboc is an American smooth jazz vocalist who debuted in 2001 with ‘With All That I Am’ and since then she’s made a name for herself not just as a live performer but as a song writer. Numbered amongst those who’ve recorded her songs are Patti Labelle, Chante Moore, Stephanie Mills, George Duke and good ‘ole Tom Jones. Since debuting, Carol’s released four more acclaimed long players but success on the West Coast jazz circuit took a toll. The singer’s marriage slowly disintegrated, but, encouraged by smooth jazz doyen and long-time collaborator, Jeff Lorber, Carol decided to chronicle the break up in a song cycle that eventually became this – ‘Smile’… her sixth full album.

The set opens with a wonderfully laid back ‘Elephant’… a song that explores the way people routinely ignore their relationship problems in the hope that they’ll just go away. But as we all know, elephants are notoriously difficult to ignore … indeed – just like this catchy, smooth jazz swayer which has a lightness that belies the seriousness and personal intensity of the subject matter. And that’s the story of the album. Any break up brings supercharged emotions to the surface creating turmoil, regret, disengagement, depression, recrimination and dozens of other destructive feelings that analysts much better qualified than I am can describe. That said – as with the aforementioned ‘Elephant’ – this chronicle of the Duboc separation is revealingly optimistic… typified by the LP’s second tune ‘Smile’. Inspired by the singer/songwriter’s young daughter, the tune’s a pleasing, urbane smooth jazz confection. Elsewhere, ‘Unpredictable’ is loose and jazzy, ‘Nobody Knows’ is a class pop act in the manner of Carole King, ‘Parachute’ is a Latin romp, while ‘Gliding’ is both sweet and lovely’; all a far cry – sonically, at least, from the potential melancholy of the subject.

Throughout, Ms Duboc’s aided and abetted by a star cast that includes Jeff Lorber on keys, flautist Hubert Laws, bass player Brian Bromberg and guitarist Michael Thompson – but the star of the show is Carol’s voice… sweet and clear, it’s a perfect vehicle for the catchy melodies that she and Lorber have concocted.

Find out more about this candid album @ www.carolduboc.com