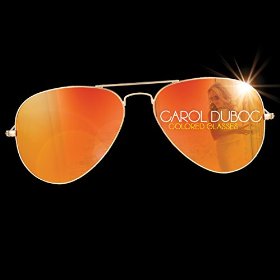 Though her name may not be instantly recognizable, Carol Duboc is a seasoned music veteran. She began her career in the biz as a writer –penning hits for people like Patti Labelle, Chante Moore, Stephanie Mills and a certain Tom Jones! In 2001 she made her own vocal debut with the smooth jazz long player, ‘With All That I Am’ and since then she’s recorded regularly and worked with some of the best smooth jazzers around and there’s plenty of that crowd on this new 10 tracker…. people like Jeff Lorber, Vinnie Colaiuta, Jimmy Haslip, Brian Bromberg, Lenny Castro, Hubert laws, Eric Mareinthal and Paul Jackson Jr all help out and to add a little more texture to Ms Duboc’s beguiling vocals Lori and Sharon Perry are on BVs.

We’re told that ‘Colored Glasses’ is a hugely personal album – tracking the difficult adjustments that come after the end of a long term relationship but, that said, the LP’s soundscape is largely up-beat, jaunty even. In places, the smooth grooves and the punchy brass reminds me of later period Tower of Power in their more mellow moments. Hear that at its most obvious on the opener, ‘Hypnotic’. It’s a tight, crisp smooth jazz/modern soul groove and it’s followed by something similar in ‘Every Shade Of Blue’. That latter has an odd feel. The optimistic groove is at odds with the melancholy, self-pitying lyrics (great old school Hammond from Jeff Lorber, by the way).

‘Celestial Skies’ is more properly mournful as is ‘Walking In My Sleep’. Then for something quite different there’s the polite funk of the album’s title cut. It’s an insistent beater which adds more variety to a long payer that straddles the worlds of smooth jazz and modern soul,