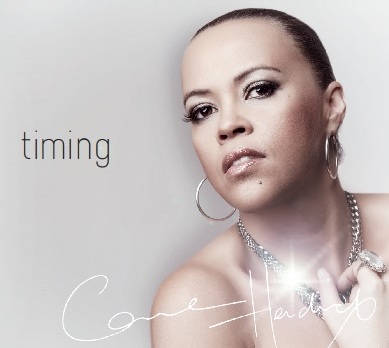 Born in Capetown, Carmen Hendricks was introduced to soul and jazz by her music-loving parents and made her pro live debut aged just five – singing The Carpenters classic ‘We’ve Only Just Begun’ at a wedding! In 1989 the family moved to Australia to escape the horror of apartheid and young Carmen soon became heavily involved in Melbourne’s vibrant music scene eventually becoming a regular on the TV show ‘Good Morning Australia’ which led to high profile work with people like Kanye West and Kelly Rowland. She made her solo recording debut in 2010 with ‘Rhythmic Soul Revealed’ and has spent the last several years putting together this follow-up.

The album’s been eagerly anticipated by the soul cognoscenti who were impressed by the LP’s double A-sided pre-release single. That single featured the title cut… a bright, brassy breeze of a tune and the much more impressive ‘I Will Not Let You Go’. There was an immediate buzz on that tune mainly because, I think, of its similarity to ‘Nights Over Egypt’ and the aforementioned notoriously conservative ‘cognoscenti’ love nothing better than a slab of heart-warming nostalgia. That said, the cut is a good ‘un in its own right and has already been lined up for inclusion in an upcoming high profile modern soul compilation.

Those who like to make more comparisons with more past soul triumphs will find much to intrigue them here. ‘Through My Eyes’ and ‘Heartbreak Again’ have similarities to the best of Incognito. That latter is particularly interesting. It begins in stripped down format with little more than a guitar accompaniment then, after it’s more than half way through, it kicks upward and Ms Hendricks turns in a huge, gospel-flavoured vocal performance. Elsewhere her style is much more understated – almost hushed – and its timbre reminds me of Deniece Williams with, maybe, a garnish of the Emotions circa ‘Flowers’.

Other album highlights include the old school soul ballad ‘You Got Me Wanting’, the Latin-flavoured ‘How Many Times’ and the jazzy ‘Cat 3’. Ms. H’s penchant for jazz is also shown by the only cover on the collection – a languid version of the standard, ‘Stella By Starlight’.