CARL HALL: You Don’t Know Nothing About Love (Omnivore) 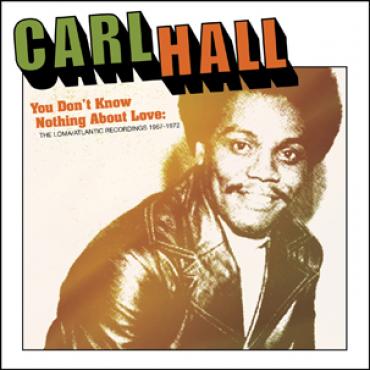 Pittsburgh-born Carl Hall is a proper underground, cult soul hero. That reputation is based largely on the singles he cut for the Warner Bros. soul subsidiary, Loma between 1967 and 1971 and because, till now, that material has been relatively difficult to find his cult status has been further enhanced. Soul cognoscenti and anoraks revel in the rare and the obscure and Hall’s output ticked both of those boxes.

If you’re intrigued about Hall and his reputation , then check out this brand new 19 track retrospective that pulls together (for the first time, we think) his complete Loma output along with tracks he cut for Atlantic when Loma released him. The album reveals a hugely intense vocalist with a remarkable range. Casual listening would lead you to suggest a gospel background… and you’d be right. Hall’s first pro musical forays were with the wonderfully named Raymond Raspberry Singers (around 1954). There, his hair-raising, multi octave swoops and soars sent east coast congratulations into raptures. After a stint in the army, Carl tried his hand at the Devil’s Music –working in Broadway shows and cutting records for labels like Mercury. (Interestingly he used a variety of aliases … like C Henry Hall and Summertime Hall to hide his identity from his old Gospel fans and keep his options open).

In 1967 and by now using his real ID, Carl came under the mentorship of Philly music entrepreneur Jerry Ragovoy who inked in a production deal with Loma. Three Hall singles followed but sadly none enjoyed material success, so Ragovoy took his protégé to Atlantic. One release ensued – a cover of Jefferson Airplane’s ‘Somebody To Love’ which again failed to score.

This new Hall retrospective (everything he cut for Loma and Atlantic, including demos) offers some insight as to why his recordings were commercially unsuccessful. Despite great songs, first class productions and clever arrangements (Tony Camillo involved in many), Hall’s performances were just too intense (histrionic even) for the aspirational Afro Americans of the late 60s. Like the music of blues wailers, maybe Hall’s emotion, passion and pain was something they didn’t care to remember or identify with. Of course, that doesn’t make Hall’s music less worthwhile. Indeed the soul quotient is high throughout… witness his most famous tune, ‘The Dam Busted’ or the searing, scorching, unbridled ‘You Don’t Know Nothing About Love’ while on the Jefferson Airplane tune, Hall’s raw, stratospheric wailing make Grace Slick sound like an insipid teenager!

In 1973 Hall and Ragovoy collaborated on one more single. Released on Columbia, the ultra rare ‘What About Me’ is a lot smoother but still passionate. The singer then moved into session and Broadway work (one of his roles was playing the Wizard Of Oz against Stephanie Mills’ Dorothy). He also dabbled with disco – without success.

Carl Hall died in 1999. At that time he was serving as minister at New York’s Richardson Memorial Spiritual Church – right back with the music that originally inspired his intense vocal passion.