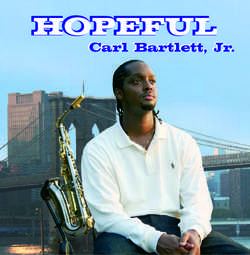 Carl Bartlett Jr is a New York-based alto saxophonist and ‘Hopeful’ is his brave solo debut. Carl’s bravery manifests itself in a number of ways… the first being to actually have the courage of his convictions and record, and then unleash a serious jazz album into the precarious modern musical world. Carl though is a determined character. Nurtured in jazz by his uncle, Charles Bartlett whose trumpet features here, he proudly admits that he has a lot of music in his head and needed to commit it to disc and fast approaching 30, he felt a deal of urgency. Naturally label interest (major and indie) was minimal, so the album appears on his own as yet unnamed label.

The 8 ‘Hopeful’ tracks and their sequencing also shows a measure of bravery. It takes a certain kind of courage to open your very first album with a five minute saxophone solo… for that’s what the LP’s title track is. It’s a deep tune that begins in a blue, almost forlorn mood but as it builds the hopeful optimism shines through. The tune, of course, also allows Carl to display his instrumental mastery. Similarly, the album ends with a brave choice…. the theme tune to the old Lucille Ball TV show, ‘I Love Lucy’…. maybe not the first thing you’d expect a serious jazzer to cover. Carl gets away with it though. After a laid back opening, the catchy changes kick in and it becomes a swinging affair in the best traditions of 50s and early 60s jazz. It’s fun piece to finish with.

In between there are all kinds of variations and mood changes. ‘Fidgety Season’ and ‘Quantum Leaps (And Bounds)’ are loose limbed, progressive affairs – just as their titling implies. Sharp Radway offers some great piano on the former while Ron Jackson’s guitar is a feature of the latter. ‘Julie B’ is the album’s set piece ballad. Dedicated to and inspired by Bartlett’s mother, the track allows bassist Eric Lemon to shine. Different again is the lovely, Latin shuffle, ‘Release’. It boasts a sweet melody – just begging for a lyric and someone like Astrud Gilberto to deliver it. That leaves the cover of ‘It Could Happen To You’. No jazz album would be complete without a tune from the great American song book and here Bartlett delivers a cool take on the Jimmy Van Heusen/Johnny Burke favourite. This is the cut on which Carl allows uncle Charles to show his licks and though he sparkles, it’s essentially a compact ensemble piece.

Yes – a brave debut. It seems though that Carl Bartlett’s bravery is working. Since launching the album at Manhattan’s Laurie Beechman Theatre, his shows around town have started to sell out and interest’s building…. you can find out more @ www.carlbartlettjr.com