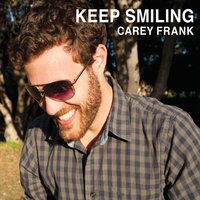 ‘Keep Smiling’ is piano man, Carey Frank’s debut album and for a first shot, it shows a depth of maturity and a fine understanding of the classic jazz trio tradition. Mind you Los Angeles-based Frank is steeped in “proper” jazz. He recorded this 10 tracker whilst finishing his Masters degree at the University of Southern California. His subject? Jazz Studies… so, listening here, I’m guessing Mr F passed with flying colours. ‘Keep Smiling’ must have been a great practical project for his assessors to consider!

Helping him deliver the album Carey has enlisted the support of bassist Sezin Ahmet Turkmenogulu and drummer Jamey Tate, whose credits include working with David Benoit. And veteran keys man, Benoit, is a good reference point for Carey’s work. Like Benoit, Carey writes tunes that are strong on melody and delivers them with a precision and clarity that will, as the LP title suggests, make you smile. The opening cut, ‘Song For T’ (a tribute to cult keyboardist T Lavitz, by the way) is a good example of what I mean. Cool and measured, it has all the hallmarks of Benoit. Other tracks of a similar elegance are ‘I Wrote You A Ballad’ and ‘What’s Her Name’ while the tempo is notched up for the well-named ‘Hot Chick’ – some great bass here from Turkmenogulu.

The album also boasts some interesting covers and they add real variety. First up there’s a version of Ellington’s John Coltrane tribute, ‘Take The Coltrane’ then, very different, there’s Carey’s treatment of John Mayer’s ‘The Heart Of Life’. Both feature sometime Yellowjackets sax man, Bob Mintzer and where he’s fiery on the former he couldn’t be more mellow on the latter. The LP’s third cover is a reading of the Charlie Chaplin standard ‘Smile’ which is given a reverential treatment.

You can find out more about the album, which, incidentally is now #1 on Amazon’s Cool jazz chart @ www.caretyfrank.com