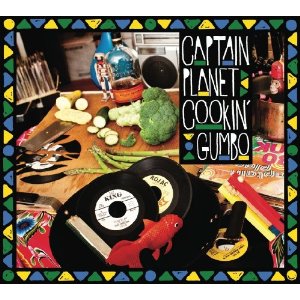 Captain Planet is the alter ego of Charlie Bethel. The Captain – a native New Yorker- began his musical voyage working for the Big Apple’s WNYU radio station. There he presented a programme simply called “Passport” where the brief was to play world music in all its diversities. His background in hip-hop, though, led him to present it all in a distinctly unique fashion mixing and sampling as he went along. He then took his ideas out on the road, crafting a different kind of dance music that he called Gumbo Funk… and that was the title of his first recording, which, when issued as 12″ moved thousands of copies. More singles and EPs followed and now his label – Bastard Jazz- have collected most together and added a few new ones to create this – his first LP.

Musically, it’s had to put a tag to it –but like the gumbo of Louisiana, it’s a heady mix of flavours. They’re brought in from all over the place and mixed in one big pot and like all experimentation – sometimes it works and sometimes it fails. Here the best track is the insistent ‘Speakin’ Nuyorican’. It’s a sweeping slice of life in the barrio and quite infectious. It works simply because the basic ingredients are designed for dancing. The worst cuts top and tail the set – ‘Ram Ad Infinitum’ and ‘One For Japan’. The former is like an outtake from a Bollywood musical featuring Kate Bush are the latter is a seven minute meander for which the skip button was invented!

In between there’s a myriad of flavours of which ‘Get You Some’ is an almost soulful groove – with a great vocal from Brit Lauren. Travel with Captain Planet and you’re in for lots of ups and downs.