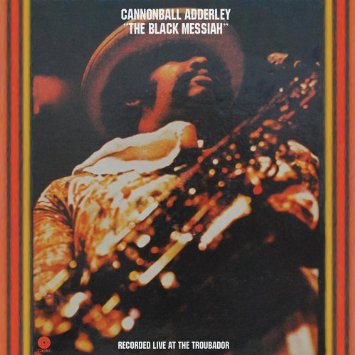 In the early 1960s, alto saxophonist Julian ‘Cannonball’ Adderley – once hailed as the ‘new’ Charlie Parker when he debuted in the middle of the previous decade – was one of the founding fathers of soul-jazz, a more accessible variant of bebop that drew its inspiration from blues and gospel music. In 1966, Cannonball – a former teacher from Florida – scored a big US pop and R&B hit with the infectious song ‘Mercy Mercy Mercy,’ penned by his then keyboard player, Joe Zawinul. Four years later, ‘Cannon’ exploded on the pop and R&B charts again with another Zawinul composition, the gospel-infused ‘Country Preacher.’ But Cannonball’s ability to make commercial recordings was only one facet in his musical armoury – his band was very versatile and in a live setting would blend accessible soul-jazz numbers with more cutting edge jazz sounds as well as adding blues, rock and Brazilian ingredients. 1972’s David Axelrod-produced ‘The Black Messiah’ (originally released by Capitol Records as a double LP set compiled from live recordings made at the small, intimate LA venue, The Troubadour, in 1971) illustrates perfectly the eclectic nature of Cannonball’s music in the early ’70s. Cannonball leads a quintet that includes a young George Duke on keys (who had come in as Joe Zawinul’s replacement when the Austrian keyboard maestro left to form Weather Report in 1971) and which is expanded by the addition of Brazilian percussionist Airto Moreira (fresh from a stint with the mighty Miles Davis), saxophonist/flautist Ernie Watts, and ace session guitarist (and Wrecking Ball member) Mike Deasy.

Never before reissued, ‘The Black Messiah’ – a cult favourite with Cannonball fans and crate diggers alike – now comes to CD for the first time thanks to those discerning folks at Dusty Groove, who have hooked up with Real Gone Music for what is one of 2014’s most exciting jazz reissues. Cannonball’s band is introduced by radio broadcaster, Rick Holmes, whose hip spoken word narratives appeared on the alto saxophonist’s 1970 album, ‘Love, Sex & The Zodiac.’ After Holmes’ brief introduction, the band launch into a sensational 15-minute tune, ‘The Black Messiah,’ penned by George Duke. It’s a pulsating piece of exploratory avant-jazz featuring some great soloing (especially from Nat Adderley on cornet) and intuitive ensemble interplay and which is stylistically in-sync with what Miles Davis was doing in the early ’70s. After this, Cannonball introduces guitarist Mike Deasy, who is spotlighted on a track called ‘Little Benny’s Hen,’ a thumping slice of blues-rock, which is totally at odds with the previous track. Deasy’s guitar pyrotechnics (using clever. volume-controlled, fade-ins) feature again on ‘Zanek,’ which begins as a reflective country blues featuring some tasteful finger-picking before evolving into a hypnotic blues groove with punchy horn punctuations. The track then shape-shifts into a chaotic free jazz meltdown before the main groove is reinstated.

A brilliant 15-minute performance of Joe Zawinul’s ‘Dr. Honouris Causa’ (a homage to fellow pianist, Herbie Hancock) finds Cannonball (who’s on soprano sax) and his band switching back to a cutting-edge, proto-fusion style that recalls Miles’ ‘Bitches Brew’ album (which Zawinul contributed material to and played on). This enthralling version eclipses both Zawinul’s own solo studio version of the tune (which appeared on his 1970 Atlantic album, ‘Zawinul’), and Weather Report’s rendition that featured on their ‘Live In Tokyo’ LP.

CD2 finds Cannonball’s band back in a familiar jazz-rock fusion mode with the tense, percussion-driven ‘Chocolate Nuisance.’ Airto Moreira features on an untitled percussion-dominated track that features Ernie Watts on flute while ‘Steam Drill’ with its portentous bass-heavy groove is a mesmeric piece of fusion. ‘Eyes Of The Cosmos’ is different again, a spacey ballad highlighting Ernie Watts’ tenor saxophone. Nat Adderley supplies a resonant vocal on the Duke Ellington ballad, ‘Heritage,’ while the short ‘Circumference’ is a showcase for George Duke’s electric piano. By contrast ‘Pretty Paul’ is a delightful bossa nova that spotlights the lyrical side of Cannonball’s saxophone playing before the band launch into their customary set closer, ‘The Scene,’ a swinging jazz groove with walking bass, over which Cannonball introduces the band. It brings the curtain down on what is a superlative live performance by a unique group whose charismatic leader knew how to bridge the gap between esoteric, cutting-edge jazz and more melodic and accessible blues and gospel-influenced tunes. That was no easy feat, but as this album shows, he did it with both aplomb and consummate ease.