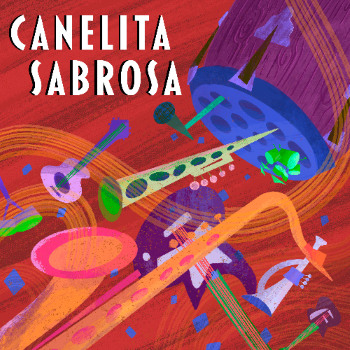 Canelita Sabrosa are a new band who peddle their special take on Latin music. “New” though is probably not the best word to describe them. You see the various band members boast impressive CVs with no less than 11 Grammy awards between them!

The band are marshalled by Atlanta conga player Chris Nettuno who during the various lockdowns invited musicians over to his porch for impromptu sessions to keep their spirits up and the creative juices flowing. Once the dust started to settle and a kind of normalcy established itself it became a  no brainer to record together and the result is this eponymous album that covers all the Latin bases and a lot more. Here you’ll hear  Santana-flavoured  guitar,  soulful sax solos, classic Latino Tito Puente vibes alongside hints of Ruben Blades and the more contemporary flavours of Camila Cabello. Indeed expect all sorts of everything – as reflected in the band’s name.  Canelita Sabrosa means “tasty cinnamon” in Spanish – and the band chose the name to reflect their multi ethnic makeup  and the multicultural sounds they offer.

The album is a 16 tracker and clocks in at an hour and ten minutes. Maybe over long; but the generous length is explained by the fact that four of the tracks come in two versions – instrumental and vocal. There’s the original ‘Clouded Vision’  and three covers – the Beatles’ ‘Come Together’,  Bill Withers’ ‘Use Me’ and the Cure’s ‘Love Song’. The other vocal is a gentle ‘Late Winter’ which channels a classic James Taylor/Laurel Canyon vibe.

Looking at those cover sources you should be realising now that there’s variety a plenty on this long player. Add to those cuts, rousing covers of Camila Cabello’s ‘Senorita’ and ‘Havana’ and originals like  the Santana- esque ‘Te Espere’, the fierce salsa of ‘Si Se  Puede’ and  the Carnival sound of ‘Breath Of Rio’ and you have a varied, vibrant Latin fest that offers a measure of optimism after what we’ve all been through.