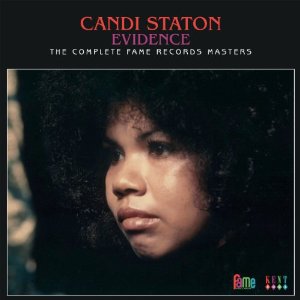 Authentic blues and proper soul music are both born out of turbulence and personal hardships. Candi Staton, born Canzetta Maria Staton, knew both more than most. Brought up in rural poverty with an alcoholic father, she launched into a doomed relationship with Lou Rawls before marrying an abusive and possessive Pentecostal minister. After seven years (and four children) she left the marriage and embarked on a relationship with Clarence Carter (who, of course, she was to later marry). In the late 60s Carter was already a name attraction in the southern states and he bought his new protégé to Rick Hall’s Muscle Shoals-based Fame Records where she released 3 albums and 12 singles – seven of which hit the R&B Top 20. All those recordings – along with an incredible 12 previously unreleased tracks – have been put together here on this wonderful, Southern soul-defining collection.

Why is it a “defining collection”? Well, we’ve already outlined the personal privations which Candi had endured prior to entering the Frame studio. When asked to sing about pain and suffering, hurt and rejection she sure knew the score! Equally, she was no newcomer to soul singing –as a girl and then a teenager she’d been trained in gospel disciplines … and it shows in every verse she articulated at Fame. Then there was the input of Rick Hall and his house bands. People like, first, David Hood, Jimmy Johnson, Roger Hawkins and Barry Beckett and then Clayton Ivey, Freeman Brown, Tarp Tarrant, Travis Wammack and Fred Pouty, knew instinctively how to craft soundscapes that would perfectly complement the singer’s tortured passions. Add to all that the skills of some of the best southern song writers (most notably, the legendary George Jackson) and you have the perfect recipe for genre defining music.

Musically there are numerous highspots here. Particularly strong are the two big covers, and that Candi Staton could make such well-known songs as Tammy Wynette’s ‘Stand By Your Man’ and Elvis Presley’s ‘In The Ghetto’ her own are testament to her huge talent. Staton fans in particular and Southern soul collectors will all have their own favourites but it’s the 12 previously unreleased items that provokes the real interest. Of the ballads the sparsest is a take on Waylon Jennings’s country hit ‘We Had It All’, while George Soule’s ‘I’ll Be Here’ is delicious. Top marks though go to George Jackson’s ‘One More Hurt’. It’s a wonderful, understated swayer and even though it’s an “up” sort of song, when Candi opens with the lines, “I’ve been hurt so many times. Misery – I’ve grown accustomed to“, you know she ain’t faking…which brings us right back to where we came in… “proper soul music”.