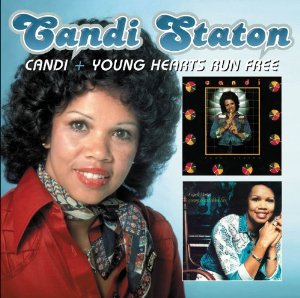 This new Edsel ‘twofer’ comprises Ms. Staton’s first two albums for Warner Bros, which followed in the wake of a successful R&B hit-making stint at producer Rick Hall’s F.A.M.E. label during the period 1969-1972. It was Hall, in fact, who had negotiated Staton’s switch to Warner Bros and it was therefore no surprise that he was at the helm for her major label debut, ‘Candi,’ released in 1974. Stylistically, if follows the sonic trajectory of her F.A.M.E. work and was recorded in Muscle Shoals utilizing the talents of Hall’s session stalwarts ‘Spooner’ Oldham (keys), Barry Beckett (keys), David Hood (bass), Roger Hawkins (drums) and Jimmy Johnson (guitar), who form the nucleus of a top grade rhythm section whose sound and style helped define Southern Soul in the 1970s. Though often overlooked in favour of Staton’s other, more disco-oriented Warner albums, ‘Candi’ is a solid set boasting some cathartic vocals from Southern Soul’s most alluring song siren. The killer cut is the edgy, adult-only Phillip Mitchell-penned ‘As Long As He Takes Care Of Home,’ which was issued as a single but there are a host of other fine and varied tracks, including another Mitchell composition, ‘Here I Am Again’ and ‘Six Nights And A Day.’

Staton’s second album for the label signposted a significant change in direction. Rick Hall was conspicuous by his absence and instead, Dave Crawford – Jackie Moore’s cousin, who was also a noted R&B songwriter and who had worked in tandem as a producer with Brad Shapiro – found himself in the producer’s chair. He wrote the album’s title cut, a memorable, uplifting anthem whose enduring popularity would end up conferring pop immortality on Staton. Fusing Southern Soul with a disco sensibility it was a massive hit and took the Alabama singer’s music to a global audience. The parent album also included a more overt nod to disco with the Crawford-penned dance tracks ‘Destiny’ and the buoyant opener, ‘Run To Me.’ Unlike some R&B artists that embraced disco, Staton never abandoned her roots in Southern Soul, as the super-soulful tracks ‘Summer Time With You’ and ‘Living For You’ demonstrate. There are some good bonus tracks, too, including a six-minute promo version of ‘Run To Me’ and a couple of mid-’80s remixes of the perdurable ‘Young Hearts Run Free.’ Overall, this is a fantastic package that reaffirms Candi Staton as one of soul’s finest female vocalists. The singer’s subsequent two Warner Bros LPs, ‘Music Speaks Louder Than Words’ and ‘House Of Love,’ are also reissued as a ‘twofer’ by Edsel.