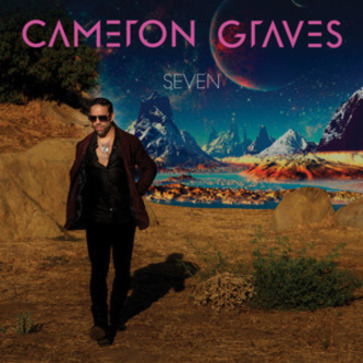 With his frizzy long hair, heavily-tattooed arms and predilection for black clothing and even blacker shades, 39-year-old Cameron Graves looks every inch a rock star who should be wielding a Flying V electric guitar and blasting out heavy riffs from a stack of Marshall amps. But appearances can be deceptive: Graves is a pianist by trade and one who has risen to notoriety via the Los Angeles jazz supergroup, the West Coast Get Down, which introduced to the world the internationally renowned saxophonist Kamasi Washington.

But judging from ‘Seven,’ his blistering second album for Mack Avenue, Graves approaches jazz with the mindset of a hard rock musician. He dispenses with the long-established head-solo-head-solo blueprint that typifies jazz composition and writes tightly structured pieces where granite riffs are juxtaposed with contrasting sections. As such, Graves calls his music “thrash jazz” and it’s a description that’s apposite as the 11-track album is arguably the jazz equivalent of a Ramones or Motörhead album; the songs are short, taut, intense pieces played at high volume and high tempo, hitting the listener like blasts from a pump-action shotgun.

While Graves’ musical approach is unique, there are distant echoes of Chick Corea’s ’70s fusion pioneers Return To Forever in his music, especially with the unison riffs and fleet-of-finger melodic runs that appear in songs like the turbo-charged opener, ‘Sacred Spheres’ and the Eastern-flavoured juggernaut, ‘Sons Of Creation.’ There is a connection between Graves and Corea’s jazz-rock supergroup, of course; Graves recently spent a spell playing in the band of ex-Return To Forever bassist Stanley Clarke, who proved a muse, mentor and champion of the pianist. Graves is ably assisted on ‘Seven’ by a simpatico band comprised of guitarist Colin Cook, bassist Max Gerl, and drummer Mike Mitchell (also a Clarke alumnus). The mighty Kamasi Washington augments the band on a couple of numbers; his eloquent saxophone lights up the infectious ‘Paradise Trinity’ and the more meditative title track, which hints at a pastoral lyricism and offers a temporary respite from the all-out aural ear-bleeding assault of high energy songs like ‘The Life Carriers’ and ‘Red.’

Cameron Graves’ blitzkrieg jazz-metal style won’t be everyone’s proverbial cup of tea, of course, but no one can deny that it’s dynamic, attention-grabbing and full of life. For those of an adventurous disposition and harbouring a predilection for jazz-rock, ‘Seven’ could be the album you’re looking for. Don’t forget to turn up the volume knob all the way to eleven, though.