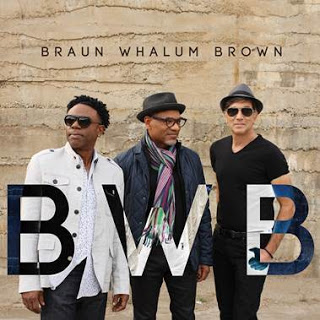 This album is the third time that smooth jazz dons Norman Brown (guitar), Kirk Whalum (sax and flute) and Rick Braun (trumpet and trombone) have come to together as BWB to peddle some super, easy on the ear jazz and if you know their pervious collaborations (or indeed their solo work) you’ll know what to expect. However, there is one significant difference between this eponymous album and the previous two collections. Where 2002’s ‘Groovin” was a collection of covers and 2013’s ‘Human Nature’ was homage to Michael Jackson, all the cuts on ‘BWB’ are originals.

The ten tracker, as you’d imagine, is mainly instrumental with five cuts offering occasional vocal input – either fun-filled exhortations to move or the odd sweetly, cooed line on the set’s ballads. Of those slowies, the best is ‘Hey Baby’ – a proper soul-based groove with guest Demille Cole-Heard handling the repeated title line. Elsewhere the three jazz men do the limited vocals themselves – as on the self-explanatory ‘Bust A Move’ , the light funk of ‘Turn Up’ and ‘Bolly Bop’ with its distinct Indian flavour.

Amongst the instrumentals there’s a hint of Caribbean swagger on ‘BWB’ while on the soulful ‘Memphis Steppin”, Whalum pays heartfelt respect to his home town. I was ,though, expecting the tune to display maybe more down home Stax/Hi flavours but maybe that’s not the nature of true smooth jazz. For that’s what you get here… classic, smooth jazz purveyed by three of its leading exponents.