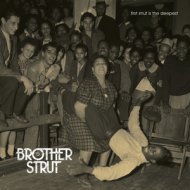 Brother Strut is a new UK soul and funk band…. but to call them “new” isn’t quite right. The strutting six piece, you see, are all seasoned session players who between them have played on hundreds of hit records. Put together by old soul boy – sax man Stevie Jones, the line up is Steve Pearce (bass), Frankie Tontoh (drums), Otha Smith (guitar), Melvin Duffy (pedal steel) and Andrew Murray (piano). Singly and together the sextet has played with people like Van Morrison, Stevie Wonder, Herbie Hancock, Al Green, Amy Winehouse, Tina Turner, Alicia Keys, The Temptations and Ramsey Lewis. Last year Jones decided that the time was right to do his own thing. He wanted to make what he called “real music” – far removed from the trivial doodling of the X Factor mentality and to help him deliver he called on the boys above – essentially his mates. The result is this cleverly titled 11 tracker that skilfully mixes hard hitting instrumentals with edgy vocals that is, yes, a million miles away from the stuff peddled by the endless TV “talent” shows.

The set begins with ‘Bags Of Funk’ on which Brother Strut show their credentials. It’s a wild and funky sax-led workout that is echoed on the breezy ‘Metropolis’, the brash ‘Chicago’ and the wild ‘Trolley Dolly’ (tell me what airline she works for!). Then there’s the rockier ‘Otha’s Tune’ on which the group’s guitar man gets to shine. The closing cut, ‘Zalentik’ shows that the players can do “sensitive” too – a haunting melody for those quiet storm moments.

The album boasts five varied vocals. ‘Let The Truth Spill Out’ is a funky rumbler with an edgy vocal from Sam Turner. The Mike Davies-vocalised ‘Vinyl Is My Bible’ is hard-hitting too with a great chorus; John James Newman takes the mic for ‘Not Your Fool’ – a fast mix of old time gospel with a jazz undertow while ‘Somebody I used To Know’ is a reggae number featuring a vocal from Ben Lee. Best of the vocals though is the slower ‘Blind Eye’. Here the lead is handled beautifully by Megan Henwood. She brings just the right amount of smoky blueness to proceedings and listen up to the lovely harmonies on the chorus. It’s quite lovely and would make a great record of the week for dear old Radio 2.

The band have made videos to accompany each track and you can watch them and find out much more @ www.brotherstrut.com