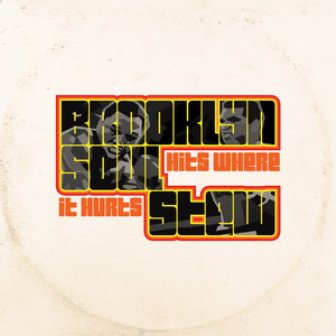 Brooklyn Soul Stew is a big (ten piece!) soul band from Sweden. Marshalled by bassist Pir Lindbloom, they take their inspiration from 70s soul most notably from bands like Tower of Power. ‘Hits Where It Hurts’ is their third long player and the first to offer a repertoire of all original, band-crafted songs.

The LP’s lead single was the well-received ‘Secret Love’… a brassy, mid-tempo groove that clearly shows the influence of TOP. The Soul “Stewers” four piece brass section blow for all their worth while joint lead singer Annsofi Wigert comes on like a 21st century Dusty Springfield… beefy pop/soul at its best! Ms W is out front on the album opener, ‘Hold Your Head Up High’. Here the sound is more Memphis than Brooklyn while the inspiration for the lyric (and we’re told, the message of the whole album) comes from a famous quotation from Cannonball Adderley… “There are times when things don’t lay the way they’re supposed to lay. But regardless, you’re supposed to hold your head up high and walk tall”.

It appears that Cassius Clay (Mohammed Ali to our younger followers) is clearly another band hero. The art work references him while there’s a whole track named for him and this ‘Cassius Clay’ is a busy, bustling affair with the male lead voice Par Grell out front and there are spoken voice samples from Clay himself. Amongst other cuts, Grell is the lead on the brash ‘That’s What the Doctor Ordered’ and ‘Brooklyn Girl’ – both lovely songs but Grell’s vocal is just a little too “European” to sound convincingly soulful… blue eyed soul maybe, classy pop for sure!

The real strength of this album lies in the power of the brass playing. The band boasts a four piece, core brass section and on a clutch of tracks they’re joined by a guest trumpeter and between them they make quite a sound! Brooklyn Soul Stew cooked up in Scandinavia…. a great recipe!