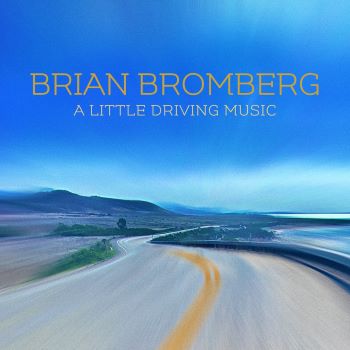 Like many recording artists virtuoso bassist Brian Bromberg has kept busy in the various lockdowns by making music and piecing together a new album with just a little help from his friends – who here include people like Dave Koz, Marion Meadows, Elan Trotman, Everette Harp, Gary Meek and Nick Colionne. Because of social distance each player recorded their parts separately and it was then down to Bromberg as producer/arranger to piece it all together. The result is the 13 tracker that is ‘Driving Music’ and despite the recording constraints, like the very best toupees, you can’t see any joins! But that’s the nature of smooth jazz, isn’t it? It’s meant to be slick and polished – no hiccups, no glitches, no jarring. That’s exactly what ‘A Little Driving Music’ offers.

And that title? Well BB, wanted to get away from the prevailing mood of COVID-era claustrophobia and political strife and create what he calls “a fun, funky paean to cruising with the top down and leaving your troubles behind.”. Our man makes that clear from the off with the bustling, bass-heavy, soul-based funk groove, ‘Froggy’s’. And there’s plenty more of the same throughout the 13 tracker… ‘Sag 5’ and the album’s title track for starters – though some may find Bromberg’s bass guitar work on that latter veering toward rock excess.  Katrina and the Waves’ ‘Walking On Sunshine’ is often cited as a classic cruising tune. Bromberg must have read that somewhere (or maybe he just feels it?) ‘cos he offers his unique take on it. Maybe because of it’s familiarity, it’s an album highlight – lovely soulful sax from Dave Koz.

Elsewhere, ‘A Rainy Day In Paris’ is charmingly evocative- images of strolling the boulevards and bridges, while ‘Bado Boy’ has a distinct Caribbean lilt, Bado, by the way, is Mr. and Mrs. B’s cat. It seems they rescued it from Barbados and the lucky feline enjoys more notoriety at the end of the album. ‘Lullaby For Bado’ is almost a bass solo piece save for cello input from Milena Zivkovic and unobtrusive percussion from Lenny Castro all wrapped in a string arrangement from the Dominican Republic String Orchestra. It’s almost Earl Klugh-ish and a lovely, lazy end to the album and/or after all that hard, open-top driving.