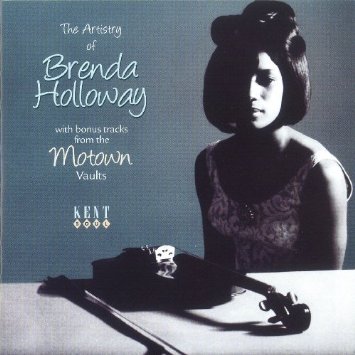 Ironically, Brenda Holloway had already left Motown by the time that Berry Gordy’s label released this compilation for the UK market in November 1968. Originally signed to the label as a precociously-talented seventeen-year-old in 1963 via Motown’s US west coast A&R man/producer Hal Davis, California-born Holloway was soon in the US charts thanks to the cathartic beat ballad, ‘Every Little Bit Hurts,’ in 1964, which also spawned a debut LP with the same title. That iconic track was included on 1968’s ‘The Artistry Of Brenda Holloway,’ which collected her first nine Motown A-sides as well as five flipsides and a couple of cuts from the ‘Every Little Bit Hurts’ album. Ace’s dependable Kent imprint has now reissued and remastered the original 16-track album and appended it with eight previously unissued Holloway tracks from the Hitsville vaults.

Certainly, ‘The Artistry Of Brenda Holloway’ – with its wide range of material – provided a fuller-bodied musical portrait of the singer than the ‘Every Little Bit Hurts’ album. Kicking of with her ’66 single, ‘Together ‘Til The End Of Time,’ its highlights included the brilliant ’67 45, ‘You’ve Made Me So Very Happy’ (which was transformed by jazz-rock group Blood, Sweat & Tears into a big late-’60s pop smash) and the Smokey Robinson-helmed cuts ‘Operator,’  the sublime ‘When I’m Gone,’ and ‘I’ve Been Good To You.’ It’s a superb compilation in its original configuration but the inclusion of eight bonus cuts on this expanded reissue elevates it to a new level. All eight cuts have never seen the light of day before and their very presence will probably surprise those who believed that the Motown vaults had in all probability exhausted their supply of unheard Holloway recordings (after all, a plethora of unreleased Holloway recordings have appeared on several Universal-curated Motown and Holloway anthologies during the last decade).

The first of the unreleased songs is the Frank Wilson-penned dancer, ‘Mr Lifeguard (Come And Rescue Me),’ an infectious tune that sounds like it belongs to the first half of the ’60s (no recording date is given). The Smokey Robinson-co-penned ‘My Smile Is Just A Frown Turned Upside Down’ – originally cut by Carolyn Crawford – is delightful, accentuating Holloway’s delicious, bittersweet mixture of innocence and sensuality. Robinson was also responsible for the loping ‘After All That You’ve Done,’ a track that has apparently been widely bootlegged by obsessive Motown aficionados. ‘The Love Line’ is a jaunty piece of pop-soul while the Hal Davis-produced ‘Can’t We Be Strangers Again,’ is a dramatic power ballad that exploits Holloway’s ability to convey deep emotion convincingly. ‘Where There’s A Will There’s A Way’ (written by the Lewis sisters) is also a vehicle for Holloway’s dramatic delivery and  ‘Just Another Lonely Night’ is a moody mid-tempo ’66 track  co-helmed by William Stevenson. The final unreleased track is ‘It’s Love I Need,’ an exploratory, gospel-hued track from Holloway’s final Motown days and which was originally earmarked for the Isley Brothers. It caps off a terrific reissue that all Motown devotees should own.