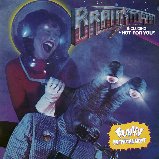 This was the third and final LP from Brainstorm, a Detroit funk and soul aggregation fronted by powerhouse vocalist, Belita Woods. Released in 1979 at the absolute apex of the mirrorball era, it was the follow up to 1978’s sensational ‘Journey To The Light’ album – recently reissued by Demon – but found the group mining a deeper disco groove. In fact, it’s because of its overt disco character – extended one-chord vamps, percussive break downs, blaring whistles, slurping hi-hats galore and over-the-top orchestration – that makes it the least satisfying long player in the group’s three album canon.

There’s no doubting the group’s commitment, talent or the sophistication of Jerry Peters’ production values but there’s a dearth of good songs – the opening two cuts, ‘Hot For You’ and ‘A Case Of The Boogie’ (which filled up side one of the original vinyl LP) are long dance grooves that are short of quality. The earthy funk of ‘Popcorn’ represents an improvement but there’s still an aura of air-headed vacuity despite some forthright gospel-infused vocals from Woods. Better still is the album’s title cut, a full-on meld of funk and rock tropes that comes over like a cross between early Kool & The Gang and the Ohio Players. Ironically, it’s when the tempo slows down that the album really rocks – the Jerry Peters’-penned, ‘You Put A Charge In My Life,’ is a delicious mid-tempo ballad that is more like the Brainstorm of old.  It’s followed by the largely instrumental ‘Don’t Let Me Catch You With Your Groove Down,’ a propulsive chunk of tight-knit disco-funk that closes the album.

After the US R&B chart success experienced by their previous two long players, Brainstorm hit a brick wall with ‘Funky Entertainment,’ which was a disappointing commercial failure. On listening to this reissue, it’s not difficult to see why – the musicality that they’d displayed so impressively on ‘Stormin” and ‘Journey To The Light’ was sacrificed on the altar of the disco inferno for commercial gain. But the gamble backfired; few people bought the album, their fans deserted them, the disco bubble burst and Brainstorm never recorded again. Even though this is undoubtedly the weakest of their LPs it’s worth tracking down for the marvellous ‘You Put A Charge In My Life.’