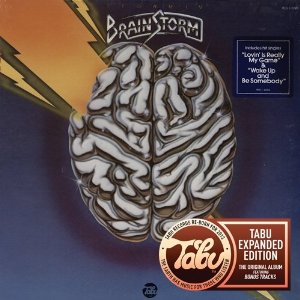 One of the key early signings to Clarence Avant’s Tabu label was Brainstorm, an energetic disco-funk aggregation from Detroit who prospered for a couple of years in the late ’70s. ‘Stormin” was the nine-member group’s debut album from ’77 and was helmed by the redoubtable New Orleans-born keyboardist/producer, Jerry Peters, whose credits during the same timeframe include Earth, Wind & Fire, The Emotions, Natalie Cole and The Jacksons. Peters brings a polished production sound to the sessions, which include lush string arrangements. Arguably the best feature of Brainstorm was their lead singer, the late Belita Woods, who after Brainstorm folded at the end of the ’70s, went to work for George Clinton’s Parliament/Funkadelic axis. Woods’ meaty, gospel-inflected vocals provide the focal point of the opening cut on Brainstorm’s debut, the pedal-to-the-metal disco burner, ‘Lovin’ Is Really My Game.’ On the album’s second cut, the mid-tempo, ‘Waiting For Someone,’ Brainstorm prove that they weren’t a brainless, one-dimensional disco act – the song’s a subtle melange of soul, jazz and Latin rhythms that exudes sophistication and features some mellifluous flute fills from the song’s writer, Trenita Womack. Even mellower is the shimmering soulful ballad, ‘This Must Be Heaven’ sung by the band’s bassist, Lamont Johnson, which spotlights Charles Overton’s saxophone work.

The tempo picks up for the earthy, funk-driven ‘Easy Things’ while a touch of class is provided by Jerry Peters on ‘Prelude,’ a short string orchestra piece that precedes the blues infused-intro to ‘Wake Up And Be Somebody,’ which morphs into a stirring disco workout with blaring horns and an uplifting, chanted chorus. The album’s title cut is a semi-instrumental funk groove with a vocal chorus, as is the closing cut, ‘Hangin’ On,’ though it hurtles along like an early Tower Of Power track complete with tight, interlocking horns. This expanded reissue also includes five bonus tracks, including a seven-minute 12-inch version of ‘Lovin’ Is Really My Game.’ As debuts go, it was a strong one from the underrated Brainstorm and it still holds up well today – but the band were to go on and surpass this with their undoubted magnum opus, ‘Journey To The Light,’ which is shortly scheduled for reissue as well.