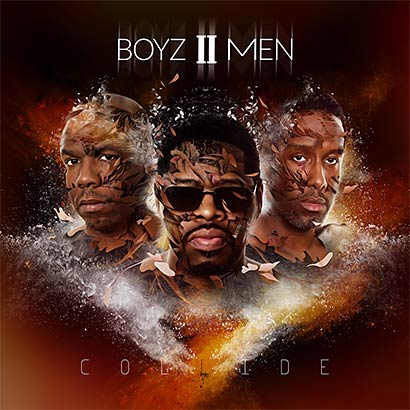 Over a 23 year career Boyz II Men have become the best-selling R&B group of all time. Now a trio, Nate Morris, Shawn Stockman and Wanya Morris attempt to sell more units with a brand new 12 tracker on which they attempt to stay true to their origins while branching out into other areas – contemporary R&B, pop and even indie rock. Committed fans, I’m sure , will love it (that’s the nature of true fans) but soul purists who enjoyed stuff like ‘The End Of The Road’ won’t find too much here to delay them.

There are really only three tracks that hark back to the group’s heyday – ‘So What’, ‘Losing Sleep’ and ‘Collide’ itself. They’re beautifully sung and lavishly crafted but the songs lack the hooks of the great tunes that made the Boyz’s name back in the day. Maybe the pacey ‘Don’t Stop’ might remind some of ‘Motown/Philly’, but the song’s not in the same league.

Elsewhere, well it’s a real mixed bag of sounds and styles with the only unified element being the dramatic, largely electronic-flavoured backing which seems to work against the trio’s attempt to inject soul into proceedings. Worst example is ‘Diamond Eyes’. It’s a meander of a song that at times sounds like One Direction and at others like Coldplay… indeed! ‘As Long As I’m With You’ is straight, chirpy pop while ‘Underwater’ is an attempt to recreate the sound of contemporary (and younger) R&B bands. Therein, I think, lies the problem with ‘Collide’. Rather than stick to doing what they know they do best, Boyz II Men want to attract a newer audience by changing their sound and style. Now, of course, all artists need to develop and evolve – otherwise either the cabaret circuit or extinction beckons, but there are better ways to progress than this.