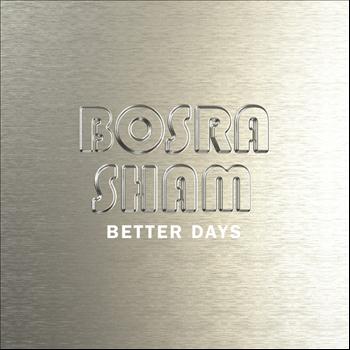 Bosra Sham are a blue-eyed soul duo from South Wales. I’ve yet to work out why singer Jamie Thain and keyboardist Max Dickson named themselves after a top American thoroughbred racehorse. I guess that’s a long story. What I do know for sure though is that the boys craft a lovely, warm laid back sound that’s both attractive and beguiling. Making comparisons is never fair – but if it helps, think Steely Dan meets Jay Kay (in his more down-tempo moments). To help them weave their musical tapestry Jamie and Max enlisted the talents of Tim Jones of Love Town Music (see our recent news feature). He in turn called in favours from a bevy of top session players – bassist Chris Woods David Pic Conley (of US band, Surface) on flutes and horns, Martin Jenkins who added extra keyboards and backing vocalists Barry Read and Diane Smith. What they couldn’t offer, Jones did – filling in on guitar, synths and programming. The team recorded the 10 tracker at Jones’ Green Park Studio in downtown Bath but you’d easily be forgiven for thinking that the whole things was put together in some swish set up in LA or New York… yes , it has that easy-going, effortless feel of the very best of American blue-eyed soul.

The set kicks off with the loping ‘Like A Fool’ – a sweet mid-tempo groove made the more attractive by unforced harmonies, subtle brass and a short guitar solo with just the right amount of bite. The heavier ‘Better Days’ and the gentle ‘Every Time’ plough similar grooves while ‘Holiday Attraction’ is faster and snappier altogether – not quite a clarion call to the floor, but almost there. It does though evoke the holiday feel that the title promises. Ditto the much more soporific ‘July’… a classic, laid-back summer groove if there ever was one and a tune offering optimism in the bleak coldness of an English February. ‘Métropolitain’ is the set’s most complex piece. Though its structure is looser than the other 9 tracks, it nevertheless possesses its own focus.”Cinematic” would be a good adjective to apply.

Bosra Sham’s ‘Better Days’ looks rather unprepossessing but investigation will bring real rewards. Hardly surprising the album’s been a permanent feature on Solar Radio’s Sweet Rhythms charts for the last month or so. Find out more (but not a lot more) @ http://www.bosrasham.com