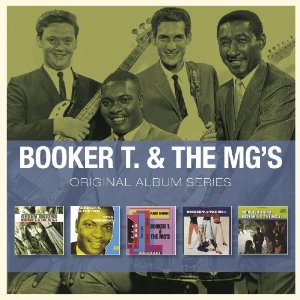 Booker T. & The MG’s gave the Ku Klux Klan nightmares. The Memphis instrumental combo comprising organist Booker T. Jones, guitarist Steve Cropper, bassist Donald ‘Duck’ Dunn (who replaced Lewie Steinberg in 1965) and drummer Al Jackson effectively demonstrated that white and black people could work together in a harmonious way. It was ironic, too, that the group was born in the heart of the American South, which was vehemently pro-segregationist during the early ’60s. But the group’s racial composition wouldn’t have counted for anything if their music hadn’t been successful and been able to bring together people of different hues all over the globe. Thankfully, it did just that and for those unaware of the group’s many musical virtues, then this new Rhino collection is a good starting place. It brings together the quartet’s first five Stax albums (‘Green Onions,’ ‘Soul Dressing,’ ‘And Now!,’ ‘Hip Hug-Her’ and ‘Doin’ Our Thing’) into one convenient package. Though the conspicuous absence of fresh remastering, bonus tracks and even liner notes will, no doubt, irritate some collectors the set’s well-priced and presents each album in a mini-facsimile of its original LP sleeve.

The iconic ‘Green Onions,’ of course, is the track most associated with the band and it was their debut smash hit back in 1962. It’s the opening cut on the album of the same name and still sounds fresh today. Sadly, that’s not true of all the cuts – particularly an organ-drenched version of ‘Stranger On The Shore’ which is dripping with the sort of cheesiness that’s usually the specialty of Blackpool’s Tower Ballroom. The group’s second album, 1965’s ‘Soul Dressing’ (with the late ‘Duck’ Dunn now onboard) is more cohesive and has less filler than its predecessor, while ’66’s ‘And Now!’ ups the ante even further. ’67’s ‘Hip Hug-Her’ is particularly strong, especially the funkafied title cut, the brilliant ‘Soul Sanction’ and a fine instrumental take on the Young Rascals’ ‘Groovin’.’  The final album in the set is ’68’s ‘Doin’ Our Thing,’ which mixes ear-catching original material with creditable soul-infused covers of then current pop hits (like the Supremes’ ‘You Keep Me Hanging On’ and Ray Charles’s ‘Let’s Go Get Stoned’).

For complete novices of ’60s Memphis soul this is an essential collection; and even for soul scholars, who may already have all the albums, this chronological-sequenced set offers a good opportunity to re-evaluate the groundbreaking work of one of R&B’s greatest and most influential groups.